President Aleksandar Vučić stated that next week will be very significant because many important decisions will be made and major political talks will be held. 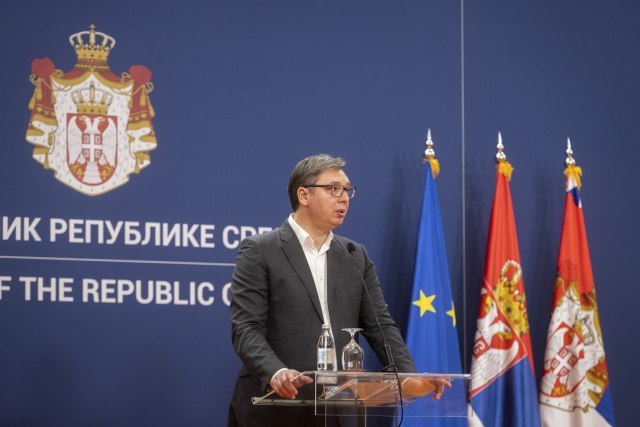 Vučić did not specify what important decisions were in question, but otherwise, as previously announced, the formation of the Government of Serbia is expected.

When it comes to important talks, the visit of the EU special envoy for dialogue Miroslav Lajcak to Belgrade and Pristina has been announced for next week.

Vučić said that it remains to be seen whether, in addition to the presidential elections in 2022, early parliamentary elections will be called and whether anyone from the opposition will boycott them.

Responding to the question of the journalists, he said that he only announced it as a possibility.

"When you attack the government and ask whether there is a strong opposition or not, let's look at yesterday's research or field research from four days ago, which shows that none of those parties that are big opponents would enter parliament, but have more media space", Vucic said.

Answering the question of the journalists whether there will be a strange parliament without the opposition, Vučić asked:

Vučić says that it is very strange for him that we have several very responsible parties and that there are people in the opposition who would like to behave more responsibly, but that thanks to the tycoon power of those who know they will not be elected by the people, they prevent everyone else with fierce campaign and pressure.

They only help us in a political aspect, he noticed.

He expressed the expectation that the new parliament will have a huge role to play in showing that it can behave differently, by not preventing opposition MPs voice from being heard in the Parliament, as it used to be, but also that opposition MPs will discuss issues by using arguments, not by turning to violence.

They need to show that they can do a lot for the benefit of Serbia, the president added.

Vučić says that when he was in the position, he sharply criticized the government, but that he never thought of coming to power by force, nor did he take the assembly by force, bragging about that.

"On the contrary, when we were in front of the Presidency, I begged people not to jump over the fence," says Vucic, adding that it never happened that as an opposition they hadn't reported a political rally, while today, he says, there is no legally reported political rally.

He adds that those who organize the protests today will not take responsibility, hoping that someone else will do the dirty work instead of them, since they know that the people will not.

Vučić also says that he always knew how to admit defeat in the elections in the second round by only 0.4 or 0.5 percent of the votes, and that he already congratulated his political opponents at half past nine in the evening.

"You have to have that kind of gentlemanly approach and understand what a political game is in which you can both win and lose," Vucic said.

He adds that, in contrast, he is exposed every day to the most brutal campaign in which his entire family is attacked through their friends, tycoons and the media, as well as being exposed to ridicule for building highways, railways, fountains in Belgrade, St. Sava Temple, Belgrade Waterfront and other projects.

He added that, when he was in the opposition, there were no opposition media that worked against the government round the clock, but there were changes because the people wanted it, while now the opposition has no clever ideas, only resorting to meaningless attacks.