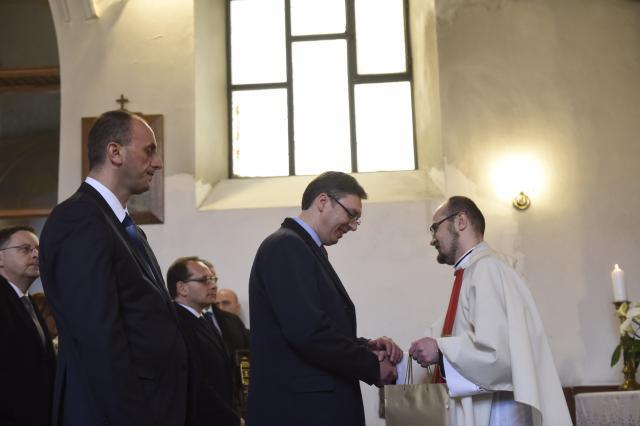 The Nuncio expressed his joy over being able to be together with the faithful in Pancevo and celebrate with them the Holy Pascha of Christ's Resurrection, the heart of faith and Christian life.

Archbishop Suriani thanked Prime Minister Vucic for being present at the mass, adding that it was proof of the feeling of brotherhood that he advocated.

The Apostolic Nuncio said that as a representative of the Pope, he was entitled, on behalf of the head of the Roman Catholic Church, to bestow blessings upon others.

The Easter Mass, which was conducted in the Italian, Croatian and Hungarian languages, was attended by Pancevo Mayor Sasa Pavlov and Italian Ambassador to Serbia Giuseppe Manco.

Roman Catholic Archbishop of the Archdiocese of Belgrade Stanislav Hocevar called on all Christians to engage in dialogue, which he believes is the only way to achieve reconciliation, understanding and overcome all issues.

In an interview with Tanjug in the wake of the recent terrorist attacks in Belgium, Hocevar said that we in the Balkans should work towards improving understanding, peace, reconciliation and togetherness, because "only reconciled can we work together and move on together."

Hocevar said that such acts could not solve any problem and could only make things worse, and they were proof that there was not enough dialogue among the people.

"What usually happens is that such terrorist acts only cause a chain of new misfortunes and we should all be aware of that. There is no doubt that every terrorist act wounds the entire humanity," said Hocevar.

"All possible societal injustices that may exist should be resolved only through dialogue. Therefore, this time, as before, the Church not only condemns and says that this is not the right path, but also calls for reason, dialogue, and mending the wrongs no matter who may have done those wrongs," said Hocevar.