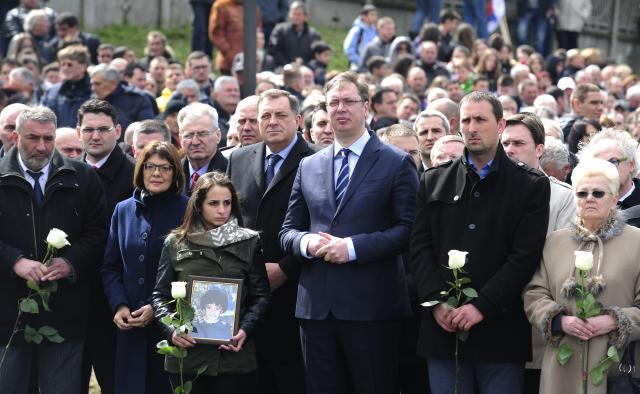 "An aggression was launched against the Republic of Serbia, the first bombs fell, and continued to fall for the next 78 days, killing and destroying. They were killing citizens of Serbia, trying to kill Serbia... the night 17 years ago will be remembered forever, we are today saying proudly, standing tall, in a sad and quiet voice, but clearly: you were killing us, you were killing our children, but you did not kill Serbia because nobody can," said Vucic.

He then addressed the families of victims:

"We can only kneel before you, bow our heads, we who are indebted, to be silent at least for a moment... Forgive, if you can, also those who do not know how to ask for forgiveness, those who did the killing, without knowing how to say 'I'm sorry'. They never wanted to see the spasm on our faces. That was an aggression of 19 powerful countries, senseless and needless, one of those carnages that destroy everything without solving anything."

According to the prime minister, every war is a crime that has no justification, explanation, reason or sense.

"There is only a warning both to them and to us - to them that they will have to, at least in front of God, tell about all the victims, they will have to say that blood was blood, not a coincidence or collateral damage. Those were children, not the fight for democracy and freedom. God may forgive them, we have, but we have not forgotten," said Vucic.

He then referenced the Crusades and "the killing of the entire town of Beziers," when a papal legate said, "Kill them all - surely the Lord discerns which ones are his," and added:

"That's what used to be said, now it is said this is collateral damage."

Vucic was addressing the central state ceremony to mark Remembrance Day dedicated to the victims of NATO's bombing campaign that started on March 24, 1999. The ceremony was held in Varvarin, where on May 30, 1999, NATO air strikes on a bridge across the Velika Morava River killed ten citizens, seriously wounding 17 others.

Beside the families of the victims, the survivors, and the prime minister, the commemoration was attended by Serbian government ministers, National Assembly President Maja Gojkovic, RS President Milorad Dodik, and others.