Vučić: "I submitted the list. They lied about it" VIDEO

Vučić: "I submitted the list. They lied about it" VIDEO 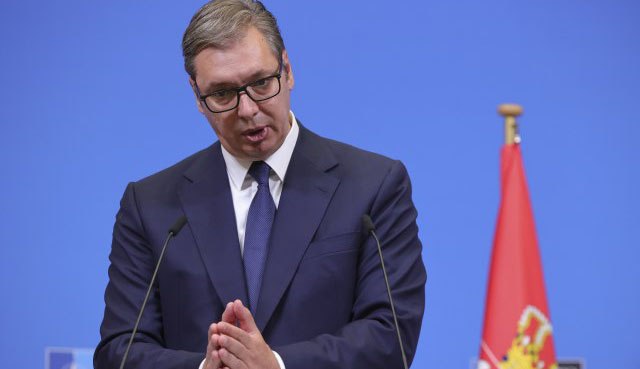 President of Serbia, Aleksandar Vučić, said that the role of KFOR, which we respect, is also important for us, as is the role of NATO.

"We believe that we will always be able to find the understanding of Stoltenberg and NATO to ensure peace and stability. I don't like to shift the blame to anyone else," said Vučić.

Vučić pointed out that "very difficult discussions" await us tomorrow.

"Tomorrow we will have difficult talks, because we do not agree on almost anything, but Serbia will stick to international public law, the Brussels Agreement and everything that has been signed. Serbia is a militarily neutral country and will remain so," said Vučić.

"We want to avoid any possibility of escalation or conflict," said Vučić. In response to questions from journalists, Vučić pointed out that the Serbian army and police never crossed the administrative line.

“We explained our position, I presented a list of Pristina’s special units’ raids in the north which needed permission for that, a list of all incidents and attacks on the Serb population, it is our duty to talk about our position and to do everything in order to preserve peace and stability,” Vucic reiterated. "I am grateful to NATO for not coming up with such untruths, unlike some others," said Vučić.

"Serbia is a militarily neutral country and will remain so. Our history is not easy, but we want to strengthen cooperation with KFOR and NATO and to avoid the escalation of the conflict. We think that we have not caused any provocation, but I understand that we from the Balkans are fed up with everyone in Brussels," said Vučić. Vučić, answering a journalist's question, said that the Quint countries and Serbia have a different view of the situation in Kosovo and Metohija.

"What we have signed is that their special forces have limited access to the North. They justify it by fighting crime. We are in a very difficult position in that regard. It is very difficult when you are cornered and have nowhere else to go, I told Jens that," said Vučić. "What is important for people in Serbia is that we explained our position," said Vučić.

When asked how quickly Serbia can react in the event that violence is carried out against Serbs in the north, Vučić answered: "I think that Jens' answer to this question is more important. And the position of the Quint countries. For them, violence is in setting up barricades, not in the systematic implementation of legal and essential violence against the Serbs".

"What we have signed in the Brussels agreement is that their special units have limited access in the north Kosovo. They often invade and use the situation under the pretext of organized crime. We are in a difficult position, don't expect the Serbs to enjoy themselves. There is a new generation of young men in the north of Kosovo who will not tolerate it anymore. They don't perceive Kosovo as an independent state, but as a territory of Serbia. There are many problems, and it is important for us to preserve the peace, and I hope that there will be enough wisdom to reach an agreement," said Vučić.

Stoltenberg pointed out that he was glad to see Vučić again and that he used the opportunity to talk with him about the tensions in the north of Kosovo and Metohija.

"I appreciate the opportunity to meet in person to continue the talks. In order for the situation on the ground to be respected, the responsibility of both Belgrade and Pristina is needed. NATO continues to monitor the situation on the ground, should stability be threatened, KFOR is ready to intervene. Constructive dialogue is the only way to find a solution. I welcome the next round of dialogue that will take place tomorrow," Jens Stoltenberg said.

"I call on all sides to show restraint and avoid violence," he added. "We have a significant military presence in Kosovo, close to 4.000 soldiers, and their presence helps us prevent escalation and any conflict. The KFOR commander is in contact with the authorities in Belgrade and Pristina and we have open lines of communication, which makes it easier to prevent a conflict. If necessary, we would mobilize our forces and increase our presence, which we have already done in the north. We will act when necessary because the main goal is to help reduce tensions," Stoltenberg said.

"NATO will do its part by sending a clear message through KFOR, by being very clear in our communications that we will intervene, we will act when needed", said Stoltenberg when asked about the danger of the conflict escalating given the rhetoric between Belgrade and Pristina.

"NATO is ready to act and we can do it very quickly. They will be deployed where needed. The very fact that we have 4.000 soldiers shows a strong commitment to stabilize the situation. KFOR is closely cooperating with all actors including EULEX. When things become difficult and dangerous, then we act like at the end of July," Stoltenberg said.

Serbian President Aleksandar Vučić spoke today with NATO Secretary General Jens Stoltenberg. Vučić, announcing the meeting with Stoltenberg, said in a press statement that the meeting was very important, that he would also talk with the U.S. Envoy for the Western Balkans, Gabriel Escobar, and many others in Brussels.