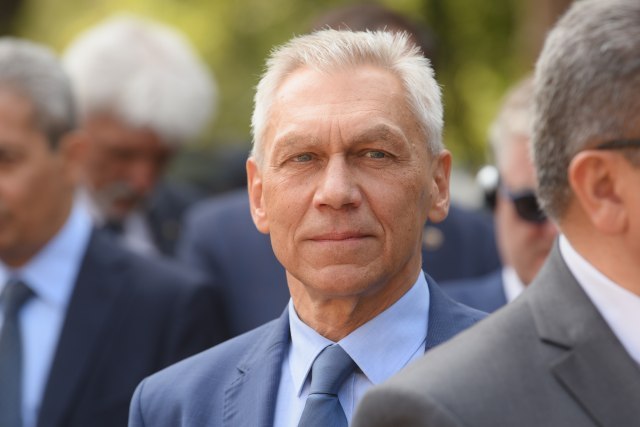 The Pristina leaders are challenging the Serbs to a military scenario, and President Aleksandar Vučić has made it clear that he will not allow the events of 2004 to be repeated, added Aleksandar Botsan-Kharchenko.

"The West deliberately reports superficially and does not want to reveal the essence of the problems that arose due to its fault, or above all, the fault of the European Union, which, by the way, based on the resolution of the United Nations General Assembly, should fulfill the role of a responsible and honest mediator, but it doesn't do it," said Botsan-Kharchenko in an interview for "Russia 24" TV.

The Russian diplomat stressed that the self-proclaimed state of Kosovo is trying to provoke the Serbs into a military scenario, but the Serbian president showed restraint and willingness to negotiate.

"Vučić expressed his views, expressed his willingness to negotiate and to meet with the representatives of Prishtina in order to resolve the situation. That is one side. The other side is reflected in the sharpness he displayed, pointing out that he, as the leader of Serbia, will not allow the events of 2004 to be repeated. If there is bloodshed, Serbia will respond adequately, defend itself and win. But at the same time, he has shown himself to be an advocate of negotiations, without prefering a military solution," the ambassador explained.

The diplomat assessed that it is obvious that the supporters of resolving the Kosovo issue by force are the Pristina authorities. He believes that the leaders in Pristina are provoking the Serbs to use force, which is most dangerous. He pointed out that, fortunately, bloodshed was avoided, but the situation is difficult, and there is no long-term solution for now.

"When Serbian President Aleksandar Vučić talks about de-escalation, it means, at least in my opinion, that there will be no final development of the situation and immediate escalation, bloodshed - to put it bluntly. Such fears existed before. The situation is extremely difficult, and this decision may temporarily remove the tension, but it does not pave the way for a long-term sustainable solution", emphasized the Russian ambassador.

Botsan-Kharchenko emphasized that Kosovo and Republika Srpska are two directions on which increased pressure on Serbia is being exerted. As he explained, the West is currently trying to force Belgrade to renounce cooperation with the Republika Srpska and distance itself from it, and when it comes to Kosovo, the goal is for the Serbian authorities to recognize it due to the circumstances. He believes that another, no less important goal of the West is to use the Kosovo issue to put pressure on Serbia, in order to force Belgrade to give up not accepting EU sanctions against Russia.

"Another goal, which is perhaps even more significant for the collective West, is to put Serbia in a position where it will no longer be able, through pressure and provocations in these two directions, which are very painful for Belgrade, as the West thinks, and I believe that this is fundamentally wrong to fight for the preservation of his position on non-acceptance and strict refusal to harmonize the anti-Russian measures and sanctions of the European Union," Botsan-Kharchenko concluded, as reported by Sputnik.

Previously, the spokesman of the President of Russia, Dmitry Peskov, stated that Moscow supports Serbia in the situation surrounding the unrecognized Kosovo and that the demands of the regional authorities to the Serbs living in the north are unfounded. On Sunday evening and Monday evening, riots broke out in the north of Kosovo due to Pristina's planned ban on the entry of vehicles with Serbian license plates and documents, which was supposed to take effect on August 1.

Kosovo authorities initially sent police there, but after an appeal from the United States, they postponed the ban, which caused tension in the province, for a month. The President of Serbia, Aleksandar Vučić, said on Monday evening that he expects a reduction in tensions in Kosovo and that, as he said, Belgrade will do everything possible for that. The situation in the province is currently calm.