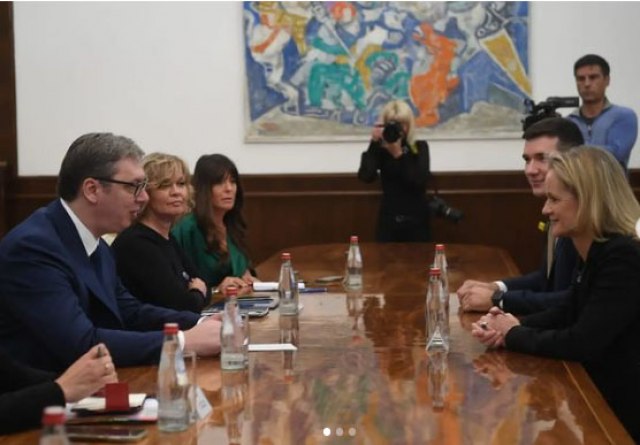 Today, the President of Serbia, Aleksandar Vučić, met with the Member of the European Parliament, Viola von Cramon, with whom he discussed the economic situation, Serbia's European integration, problems in dialogue with Pristina, as well as the regional situation and initiatives to connect the Western Balkans.

President Vučić pointed out that Serbia will continue to follow its European road even more intensively and emphasized that Serbia approaches regional policy seriously and responsibly and that is why it is recognized as a reliable and responsible partner in the region, the Presidency said in a statement.

Speaking about the dialogue between Belgrade and Pristina, Vučić emphasized that the conversation is the only right way to resolve open issues, as well as to reach a sustainable agreement. He pointed out that he expects constructive support for dialogue and finding a compromise solution, with the application of existing agreements, and above all the formation of the Community of Serbian Municipalities.

President emphasized that Serbia will pay special attention to energy efficiency and the improvement of the environment, emphasizing that he expects the support of the European Parliament in these fields, as well as Viola von Cramon personally. MEP Viola von Cramon pointed out that respect for the rights of Serbs in Kosovo is in the interest of the European Union and the European Parliament. She also emphasized the importance of continuing the dialogue, emphasizing that in the current difficult geopolitical situation, it is necessary for both sides to be responsible and refrain from provocations.

Speaking about the media situation in Serbia, Viola von Cramon pointed out the problems that exist in this area, emphasizing the need to implement serious and fundamental reforms in the field of rule of law, as well as greater commitment to EU integration processes.

The photo from the meeting was published by Vučić on the Instagram profile "budućnostsrbijeav".