TURIN -- After the match with Casper Ruud, Novak Djokovic won the ATP Grand Cup as the World No.1 at the end of the season.

TURIN -- After the match with Casper Ruud, Novak Djokovic won the ATP Grand Cup as the World No.1 at the end of the season. 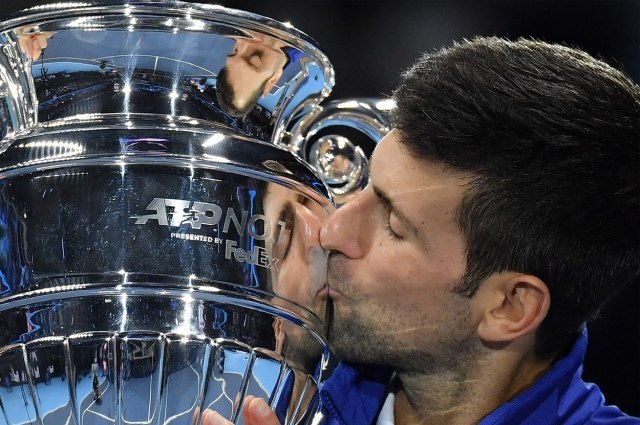 Then, the president of the ATP, Andrea Gaudenzi, handed him the cup, and Novak addressed the audience in fluent Italian.

"Good day to all, good day to Turin, Italy. We have a beautiful event in Turin, everything is great organized and I am happy that the tournament has moved here. The world's best players have come here to Turin to play in front of you. Thank you for this wonderful support, I regard Italy as my second home, I played here as a child, and my first coach was an Italian, Riccardo Piatti, who is now with Jannik Sinner", said Novak.

He thanked everyone and said that the hardest thing is to be the first in the world because that requires constantly playing at a high level.

"The most difficult thing in our sport is to finish the year as number one. It takes a lot of consistency, success in all tournaments. This is a trophy for my family, my team, I am grateful to everyone," Novak added.

He also remembered the moment when he watched Pete Sampras as a boy.

Novak broke his record, as the American was first six times at the end of the year.

"I was four or five years old when Sampras played at Wimbledon for the first time. I was looking for a racket and I immediately fell in love with tennis. Being aware that I'm holding the record now, and that I'm ahead of Pete, that's amazing."

In the end, Novak wished the Italians and Matteo Berrettini a speedy recovery and emphasized that the Italians can be proud of their players.