BELGRADE -- In a serious traffic accident, which occurred in Zemun early this morning, a GSP driver was killed and several people were injured

BELGRADE -- In a serious traffic accident, which occurred in Zemun early this morning, a GSP driver was killed and several people were injured 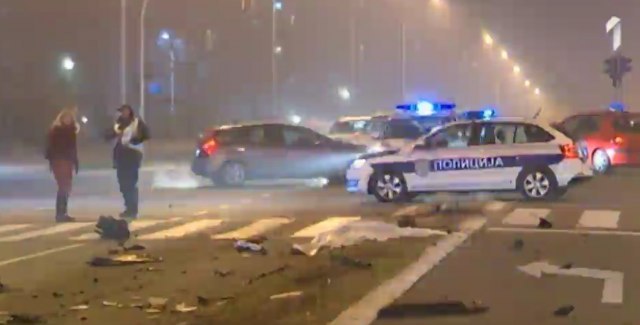 A serious car accident occurred on Car Dusan Street in Zemun, Tanjug told the Ambulance Service when two buses and one car collided.

The accident occurred when a speeding passenger vehicle emerged from Trscanska Street to collide with a bus owned by a private carrier on the line no. 45. The same vehicle then hit a city bus line no. 15, killing its driver (30).

Three people were injured, including the driver of the privately-owned bus, one passenger from that bus and the driver who caused the accident. They have all received medical treatment.

A car involved in the crash has been completely destroyed, as well as the two buses. Thirty year old driver of the city transport company GSP bus on the line 15, passed away on the spot.

"GSP Belgrade expresses its deepest condolences to the family of the driver who was killed, who lost his life through no fault of his own, and wishes a speedy recovery to the injured. It also urges all traffic participants to be careful and obey traffic regulations, so that such situations do not happen", it is said in the statement of the public company GSP Belgrade.\

Tanjug finds out that three ambulance crews, firefighters and police came to the scene.

The man suspected of causing the accident allegedly attempted to run away from the police, but he was soon arrested.

Bus traffic was suspended in Car Dusan Street and the lines were displaced or shortened.

Public Transport Secretary Jovica Vasiljevic, on behalf of the City of Belgrade, expressed his deepest condolences over the traffic accident.

"Nothing can bring back a young man who lost his life, and that is an irreparable loss for his family. We offer our deepest sympathies to the family of the driver who died and to GSP Belgrade," it is said in a statement from the Secretariat for Public Transport.

"An investigation into this traffic accident is under way. GSP Belgrade and the private carrier 'Unacop' are cooperating with investigating authorities and the course of the investigation and its results will shed light on all the circumstances of the accident. Based on the initial information collected from the scene, everything indicates that the bus drivers are not guilty and that the car accident was caused by an aggressive driver of a passenger car," the statement added.

It added that the City will continue to rebuild the GSP fleet so that citizens will have better and improved transport and drivers with better and safer working conditions, as new vehicles imply greater reliability and safety in every respect. The Secretariat for Public Transport has expressed hope that injured passengers in this morning's crash will have a speedy recovery.

Vesic: City will offer help to the driver's family

The City of Belgrade expresses its condolences to the family of the deceased GSP driver, who was killed in a car accident in Zemun this morning, and will do everything for the family to get help and support, Deputy Mayor Goran Vesic said.

Vesic also said that the City of Belgrade will cooperate with the competent authorities in the investigation of the serious accident.