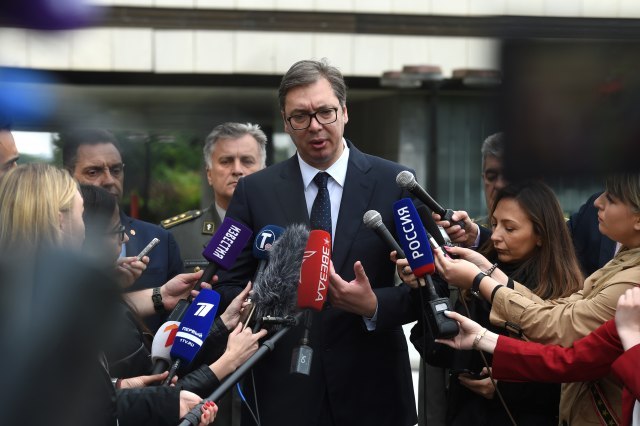 Speaking on Friday, the president also said that "we will see EU's reaction, today or tomorrow" and added that "we know what to do" if that reaction doesn't happen.

Vucic pointed out that this enough speaks to the gravity of the situation. The Albanians, he noted, have only one church in which they are praying, and that is the United States, "and don't care at all about anything they say or do against Russia and the Serbs."

It is important for them to be praise the US mission to the OSCE for their "anti-corruption action," he added, pointing out that it was "as anti-corruption as Haradinaj and Thaci are against corruption."

"To me it is much more important and more indicative that the Germans, the English and the French, and Brussels are silent. That document (Brussels agreement) was signed in Brussels by Dacic and Thaci, but in the presence of Kathy Ashton (Katherine Ashton, then EU foreign policy chif," said Vucic.

"If the EU is not in a position to guarantee an agreement in whose making it took part, let it be said, so we know that these agreements have no further legal force."

Then "other things, too, will be taking place in a different way," he continued.

It will add to uncertainty and will cause a lot of problems to all parties, but it is important that the EU informs us on this issue instead of informing us about the various types of nonsense that some political tycoons write to them about," said Vucic, and concluded:

"It would be good to inform us about what we have a spent a lot of time and we spent energy on, so that we can pacify things. SO I hope that we will see today or tomorrow EU's reaction on this issue, and if it doesn't come, that's good too - then we, too, know what we are supposed to do."
mo šta je i nama činiti".