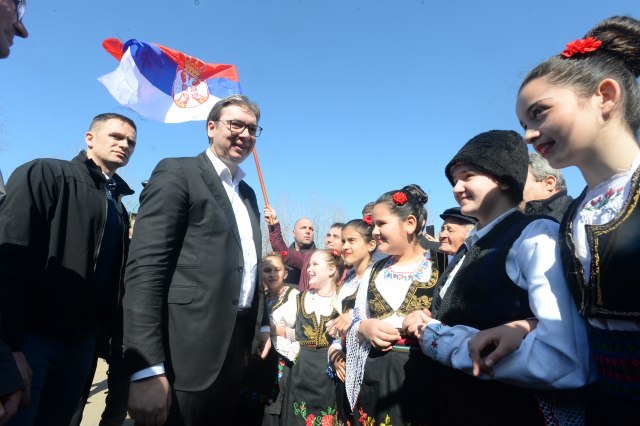 "They are so much so superior and convincing in every sense, professionally and in numbers," he stressed, adding that there were "more than enough of them" on the administrative line (with Kosovo), that they could intervene "at any moment."

Vucic was in the town of Lebane when he thus responded to journalists asking him "how to preventing (Kosovo) Albanian incursions (into central Serbia), such as recently happened in Kursumlija area villages." He also said he thinks the reaction after that event was exaggerated.

Vucic also said that "a road should be built across the Radan Mountain, in order to increase the number of Serb population in the zone toward the administrative line, because there are almost only Albanians living there."

"As far as our forces are concerned, they are more than sufficiently represented to intervene at all times. They are disproportionately large in relation to the need. People should not worry," he underlined.

He added that "thievery is happening everywhere, and Serbs rob jewelry stores, houses of other Serbs."

"As far as the Albanian-Serb relationship is concerned, there is no need for concern," Vucic stressed.

Aleksandar Vucic, reacting threats from Pristina, said that "Medvedja and Sijarinska Banja" which he will visit during on Thursday, "will remain Serbia."

During his visit, the president also used the opportunity to, as he did in Vlasotince earlier in the day, urge citizens not to worry about the threats from Pristina.

"I'm listening to stories from Pristina. Medvedja and Sijarinska Banja, of course, have been Serbia and will remain Serbia always. We invest big money and invest in the future," the Serbian president stressed.

Vucic said that there was no need to respond to threats to anyone every day and to be always justifying himself, but that it was important that "the result would eventually be on our side."