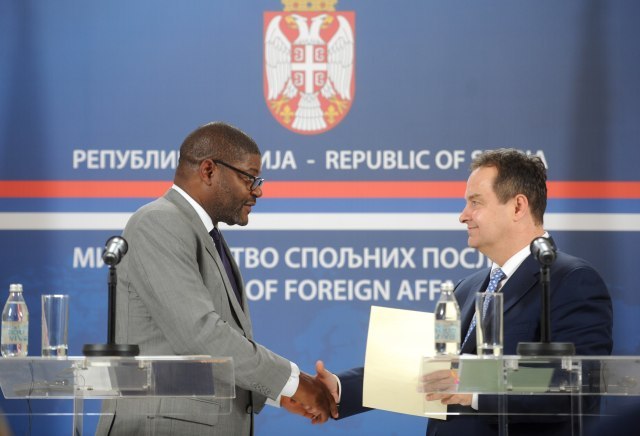 The note states that Liberia "recognized the independence of Kosovo based on its realization that Belgrade was not prepared to negotiate a solution with its Southern Province Kosovo."

"Today, the dialogue between Belgrade and Pristina is taking place under the umbrella of the EU. With this, it is only appropriate for Liberia to take a stance, which allows for a sustainable solution for citizens of Serbia and Province of Kosovo, as is being done through current negotiations," the note further read, and added:

"In the line with all mentioned above, the Republic of Liberia annuls its letter of recognition of Kosovo. This decision remains in effect until the discussions and negotiations are completed under the European Union."

Dacic told reporters today that Liberia's decision was very important for Serbia, as it showed that the process and the Kosovo dialogue are still taking place - "and in a way, this is our contribution to to the continuation of the dialogue in Brussels on Sunday."

Findley said that his visit allows Serbia to open a new page in the history of relations between the two counries, and noted that Liberia and Serbia, as part of Yugoslavia, always enjoyed friendly ties.

"We are today a new government, a new democracy, and we are trying to form partnerships with you and the people of Serbia. Today we signed six agreements and these bilateral documents will benefit both our nations," he said.

Liberia is not the first country to have revoked its recognition of Kosovo - previously this was done by Suriname, Sao Tome and Principe, Guinea- Bissau, and Burundi.

Exactly how many countries currently recognize Kosovo is a contested issue - as Belgrade and Pristina cite different numbers.