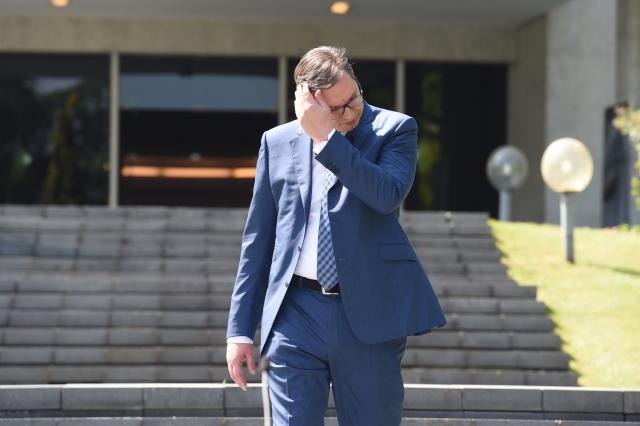 "It's easy to say - go and fight for Kosovo. However that always led us to war. I want to start a new path - for Serbia. I want to openly and fairly discuss the solution of the Kosovo conflict," Vucic said in an interview for the Swiss daily Blick.

"Although the Serbs are not yet ready for that, I will not back down, because this debate will have a healing effect for all of us, regardless of whether we will achieve a good result or fail," he added.

The president underlined that unless both sides are ready to lose something, the conflict will last forever, and this will harm both sides. Reminding that he was the youngest deputy, the youngest minister and prime minister and now the youngest president, Vucic assessed that he is the best man for this task because he "no longer has any no personal ambitions."

He stressed that it would be better to find a solution today than in 100 years, because the conflict must be resolved once, and Serbia is ready to reach a compromise. "I know that Albanians and Serbs living in Switzerland live peacefully and even as good friends, that is exactly what we must achieve in the homeland, too," Vucic said.

When the interviewer noted that he had asked for a clear time-frame from Brussels for Serbia's EU, Vucic said that he "knew that he could not get it," and cited "Kosovo and relations with Russia" as the reasons.

"Everything else, that is presented against us, serves only to exert pressure regarding these two issues," he is convinced.

When it comes to "Prime Minister Ana Brnabic's statement that Serbia has already decided between Russia and the EU," Vucic said that he "does not know if she said that "- but that Serbia has made its decision along time ago, "and it leads us to the EU."

"However, we are not yet a member and my task is to foster the best possible relations with Russia," he explained.

He pointed out that Serbia never recognized Crimea as part of Russia and that Ukraine is not a central topic but instead "our military cooperation with the Russians - while we hold four times as many military exercises with NATO or the US military than with Russia."

When it comes to refugees, Vucic said that the situation in Serbia is much better today, adding that the country was "never the one who made a loud complaint even when the largest number of refugees passed through it."

"We know what refugees mean. During the war in Yugoslavia, 30 members of my family fled to Serbia," the president said. He announced that if the refugee wave from 2015 repeats, Serbia would "behave the same - and certainly will not raise fences."

Vucic denied that he intends to introduce a dictatorship and an authoritarian regime in the country, saying that "in a democracy, one should accepted defeats, too, like I always did."

Asked for how long he intends to remain in power, he said, "There is no doubt I would win the next election, but I might not be a candidate."

"In the next five years we have a lot of work to do, and then the time will come for someone else to take over the job. Then all of you who are skeptical will say that you had made a mistake," said Vucic.

Reacting to the remark that in Bosnia, "they do not believe he is a man is of reconciliation," Vucic said that according to opinion polls, beside Vladimir Putin, he is the most popular foreign politician in that country, and added that he was "not hiding his past."

"I am not ashamed to say that I have changed. Only donkeys do not change. I am proud to show it every day, and that citizens trust me," explained Vucic.

He added that he "cannot say he is ashamed" but that he is "analyzing his mistakes" - and is "still a proud Serb." However , today he "knows that life does not consist of owning a stone, instead one must improve the daily life of citizens."