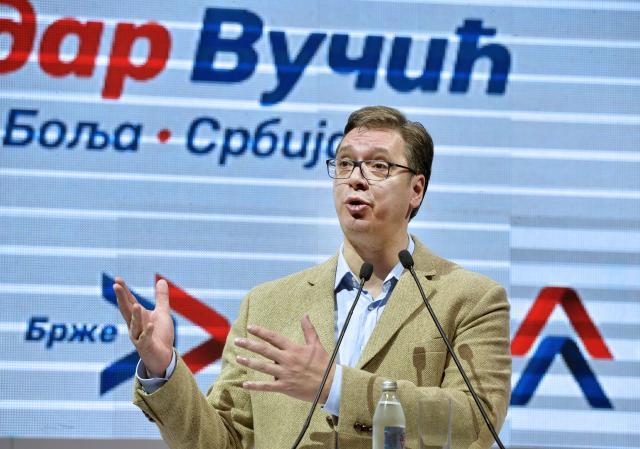 Both Jeremic and Vucic - who is currently Serbia's prime minister - are candidates in the April 2 presidential election.

"The Burgije brothers, Pauci and other criminals, as well as the entire narco market in Serbia, is run by his wife, Natasa Jeremic," Jovanov said of Vuk Jeremic.

Vucic's statement today said he would "not allow the families of the candidates of the former regime" to be attacked "the way they have been attacking his own family."

"My colleague and friend Milenko Jovanov made a huge mistake when he attempted to respond in kind," Vucic said, and added:

"On behalf of the decent and normal Serbia, on my own behalf, I apologize to all citizens who, at least for a day, thought there was no difference between us and that we're all the same. We are not the same and never will be."

Vucic then "called on citizens to accept his apology" for a statement that was "wrong, and not even his."

The woman who was mentioned in Jovanov's statement, Natasa Jeremic, on Tuesday called a news conference and said that she would not accept the apology.

Jeremic also told reporters that she was "afraid of what would happen next."

"I don't think they'll stop here, I'm afraid someone will plant drugs on me. I don't know what's next, I'm sincerely scared," she said.

Jeremic also noted that if she decided to sue, she would sue Vucic, rather than Jovanov.

Jeremic, who is a news presenter on Serbia's state broadcaster RTS, also thanked all those who came to the press conference today - "above all her colleagues from RTS" - for their "courage, support, and friendship."