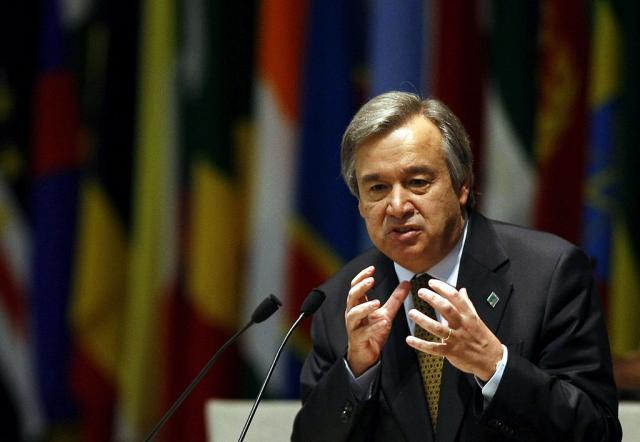 In the report, Guterres also "urged both sides to respect the agreements already reached, and leaders to avoid inflammatory rhetoric," Beta has reported.

"The loss of momentum increases the risk of the process of normalization, which is in the interests of both sides, halting and potentially going backwards," said the report, which covers the period from October 16, 2016 to January 15, 2017.

Guterres expressed his concern over the increased tension and mutual accusations that characterized relations between Belgrade and Pristina in the last quarter of 2016.

"I call on the leaders on both sides to show greater vigilance and restraint in expressing their views in public, to avoid inflammatory language, and present their positions exclusively by peaceful means and through responsible dialogue," the report said.

Tensions have been further increased also by the arrest of leader of the Alliance for the Future of Kosovo Ramush Haradinaj, and because of a train that was "conspicuously" painted in the colors of the Serbian flag with the inscription "Kosovo is Serbia" in several languages, it is estimated in the report.

After the "train incident," politicians in both Belgrade and Pristina engaged in mutual accusations, blaming the other side of deliberately provoking unrest and possible violence, Guterres noted, adding that the "bellicose language ignited the public opinion among Kosovo Serbs and Kosovo Albanians".

It is estimated that the tendency of creating big disputes out of minor problems in order to achieve a tactical advantage or win points on the domestic scene contributed to the deterioration of relations between Belgrade and Pristina.

Guterres, however, said there are leaders in whom he sees sincere commitment, courage and vision of a better future, and said he hoped that these positive examples of leadership at all levels of governance would be more frequent this year.

"I call on both parties to respect the agreements reached in the dialogue under the auspices of the EU in good faith and without undue delay," the report said, warning that if there was no tangible improvement that people expect, there was a risk of regression, "which can be dangerous."

Guterres also said it was of essential importance that the Kosovo institutions respect operational requirements of Interpol and renew full cooperation with UNMIK and the office of Interpol liaison, and commended both sides for their constructive cooperation with his Special Representative (UNMIK chief) Zahir Tanin.

"The priorities of the mission remain to promote security, stability and respect for human rights in Kosovo and the region," the report said.