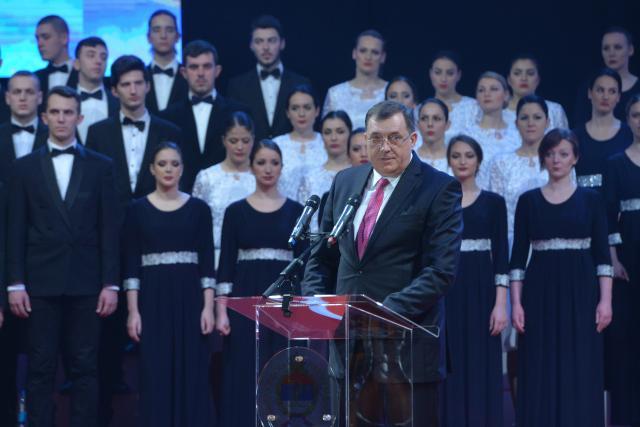 According to the newspaper, Dodik, the president of the Serb Republic (RS), "said the Bosnian Serbs would be better off unifying into a state with Serbia and the Serb territories in Kosovo, which would then also merge with Montenegro."

The article added that Dodik "made similar statements in the past," but has now "for the first time formulated the idea of ​​a 'Greater Serbia' so openly."

This "sensational statement" was made on the eve of the RS Day celebration, the newspaper continued, noting that the holiday is considered "illegal" by "the international community" and "discriminatory" by Croats and Muslims (Bosniaks).

"The Muslims, who make up the majority of the population in Bosnia-Herzegovina, as well as representatives of the international community, fear that after the September (RS Day) referendum Dodik went down the road of the exit of the RS from the composition of Bosnia-Herzegovina. His statement on the eve of the holiday only confirmed these fears," said the daily.

Kommersant further writes that the resulting situation would cause "an almost inevitable escalation of the conflict of the RS leader with the international community."

The newspaper said that "diplomatic sources in Bosnia-Herzegovina see Dodik's isolation and anti-RS sanctions as the most realistic option," while, should this happen, "both Serbia and Russia, on whose support Dodik counts, could be drawn into the confrontation between him and the West."

Referring to the absence of Serbian PM Aleksandar Vucic, who is currently on a several-day visit to India, from the RS Day celebration in Banja Luka as Vucic "avoiding" to participate - instead "limiting himself to sending his congratulations" - the newspaper noted that ahead of the September referendum Vucic made it clear Belgrade did not support the holding of the plebiscite, "although it had not intention to interfere in the decisions of the Bosnian brothers."

According to Kommersant, "Moscow is also in no hurry to support Dodik, considering that after his meeting with President Vladimir Putin in September the Kremlin issued only a brief statement that mentioned neither the referendum, nor its support."

"Otherwise, Russia would not only get a new reason to quarrel with the West but would take an even stronger pro-Serb position than Serbia itself," the newspaper said.