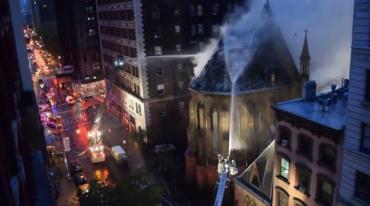 The fires affected and to various degrees damaged a Macedonian and a Greek church in Australia, a monastery in Russia, and the Serbian Orthodox Church of St. Sava in Manhattan, New York City.

According to the New York tabloid, the city's fire department (FDNY) said the blaze on West 25th Street "does not appear suspicious" - however "members of the Orthodox community have doubts."

The article said they are worried that the fire was started intentionally "in retaliation for the religion’s role in blocking the canonization of Croatian Nazi supporter (Catholic) Cardinal Aloysius (Alojzije) Stepinac."

Dusan Batakovic, former Serbian Ambassador to France, now director of the Institute for Balkan Studies said that "too many churches have burned to call it an accident,” and added:

“It is very strange that it happened, that the fires all took place on Easter, the greatest Christian Orthodox holiday. Some kind of terrorist action can not be excluded.”

“Within the last six months, the Serbian church was urging Pope Francis not to canonize into a saint, Cardinal Stepinac, for his complicity in the large-scale massacres and genocide against the Serbs, Jews and Roma (Gypsies),” Batakovic said.

According to Batakovic, the pope postponed the decision on Stepinac despite protests from the Croatian Catholic Church - "and there is a lot of anger, because he is considered as one of the key church members in the Croatian history.”

The newspaper also quoted a letter Serbian Orthodox Patriarch Irinej sent to the pope, which said there were "too many open questions and wounds which Cardinal Stepinac symbolizes," and that "his canonization, to our great regret, would return the relations between Serbs and Croats, as well as between Catholics and Orthodox faithful, back to their tragic history.”

Executive Director of the Brooklyn-based Jasenovac Research Institute Barry Lituchy also spoke for the daily to say he had been "bombarded with calls from worried Orthodox community members."

“This is a terrible tragedy, and the thought that this is an attack has not escaped us. This deeply affects everyone in the Serbian community," he said, and advised investigators "to take a close look at the recent Catholic-Orthodox relations when trying to determine what may have caused the fires in Australia and Russia."

Lituchy noted that during the 1990s wars in Yugoslavia the Serbian church in New York received threats.

According to the New York Post, the church now had "deep financial troubles" as it is "battling a major Manhattan developer over a USD 100 million project that fell through two years ago."