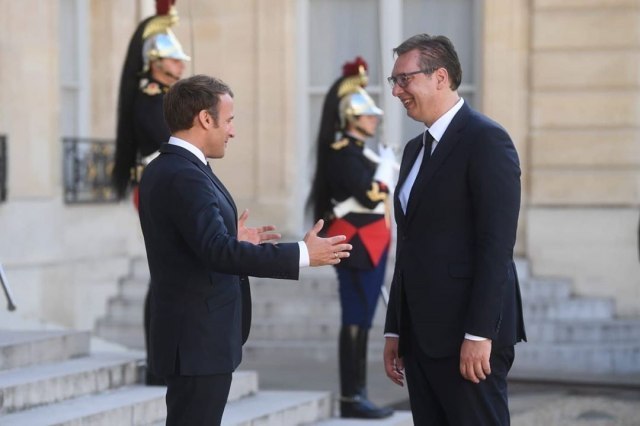 Macron welcomed Vučić in the Élysée Palace next to the Republic Guard.

We remind you that Vucic announced the conversation with Macron as highly important. ﻿

Several of the most current topics will be discussed, from bilateral relations, the EU path of Serbia, to the view of the overall organization of Europe and the world.

The photos published on Vucic's Instagram account show that the Serbian and French colleagues are in a good mood during the warm welcome.

The dialogue between Belgrade and Pristina is in the focus of attention of the talks between the two leaders behind closed doors, and, as announced, they will also discuss Serbia's European path, bilateral relations between the two countries, and the coronavirus pandemic.

After the meeting of the two delegations, a working dinner will follow, which Macron is organizing in honor of President Vucic.

This is a very important meeting at which President Vucic will certainly seek support and understanding for Serbian interests from President Macron, who has repeatedly stated that Serbia and its president have a sincere friend in France.

Tomorrow, President Vucic will participate in the video summit dedicated to the Kosovo issue, which Macron organized together with German Chancellor Angela Merkel.

A meeting between President Vucic and Hoti is planned for Sunday, July 12, in Brussels, in the presence of Borrell and Lajčák.