Chaos: Protesters marched on the Assembly and RTS, police disperse them using teargas

Protest in front of the National Assembly turned into several hours conflict between the demonstrators and the police downtown. There are injured on both sides. 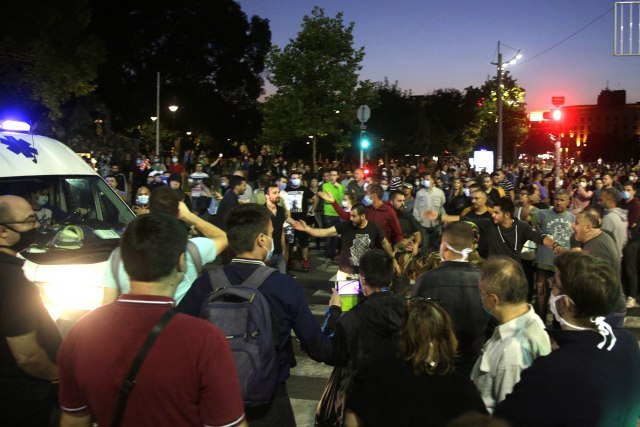 The protests followed President Vucic's address and were provoked by the president’s announcement of more restrictive measures to combat the coronavirus pandemic, and a large crowd of people was formed on the corner of Takovska and King Alexander Boulevard.

Among those gathered are the members of the Initiative "Do not let Belgrade d(r)own" (Ne da(vi)mo Beograd), members of the organization "1 of 5 million", independent MP Srdjan Nogo.

Opposition supporters did not allow the ambulance to pass, according to some Belgrade media, although, as it is claimed, they saw that the situation was urgent and that the vehicle was under rotation.

At one point, the protesters managed to enter the Parliament, but the police intervened and managed to push them out very quickly.

The police did not intervene sharply, and the media reported that only one person was detained, due to "particularly aggressive behavior towards one policewoman".

One of the first to enter the Assembly was Srdjan Nogo, and earlier tonight, when a former member of Dveri appeared at the protest, those gathered started chanting "Go home, Nogo".

The protests started because of the curfew and capital lockdown that was announced to start on Friday, but while the protesters were entering the Parliament, one of them told the camera of the present media that they were protesting because "they will not allow the settlement of migrants in Serbia".

The demonstrators without keeping distance and without wearing masks, addressed the protesters on a couple of occasions through a megaphone. One of them invited those present to urge their friends and acquaintances to join them, and the other said that he would not take measures and that he would not vaccinate his child, Tanjug reports.

Police fired teargas in order to disperse the gathered demonstrators away from the National Assembly.

The protest in front of the Assembly of Serbia against the newly announced measures to combat coronavirus pandemic got out of control tonight after 10 pm, Tanjug reports.

The gathered people broke down the protective fence in front of the assembly, torches were lit, and members of the police took shelter at one point, reports the Tanjug reporter on the ground.

However, the Tanjug agency states that it is not clear whether someone entered the assembly building as its doors are open.

The media also report that the protesters are trying to enter the Parliament again, as well as to shoot at the police. As they say, rocks are also flying, and tear gas was fired again. The citizens responded with torches, the riots are still going on as the police repeatedly fired teargas but failed to chase the crowd away, which resisted police attempts to push them back.

In front of the Assembly of Serbia, just before 1.30 after midnight, several police patrols arrived with police vans, minibuses. At least 10 police cars came before the parliament. Protesters are currently concentrating on three "points", one group in Pioneer Park, another in King Alexander Boulevard, and a third on Nikola Pasic Square.

Police managed to "take control" in Pionirski Park around 2 am, from where they pushed the protesters into the nearby streets, as well as from Nikola Pasic Square.

Protesters were also pushed out of the area near the Church of St. Mark, and the plateau in front of the Assembly of Serbia is empty.

The number of demonstrators is decreasing, as the police are pushing them away from the Assembly.

One larger group is still gathered in King Alexander Boulevard, near the Faculty of Law.