Video conference of the European Union - Western Balkans is taking place today, with the participation of Serbian President Aleksandar Vucic 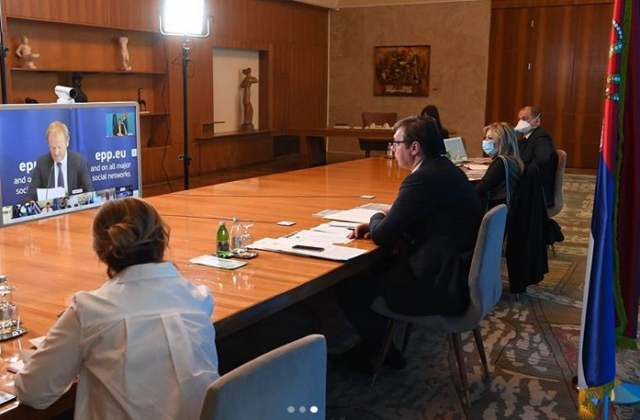 The virtual summit, organized by the EU Presidency of Croatia and chaired by European Council President Charles Michel, will be held from 4.30 pm to 7.30 pm.

The rules were set according to which the participants of the video conference will sit in front of a neutral background, there will be no national signs, flags, coats of arms on the screen behind them, not even the names of the states, only the name and surname of the person speaking.

Referring to diplomatic sources, HINA writes that the rule was introduced at the request of Spain, which does not want to attend meetings at which Kosovo* is mentioned as a state.

The video conference will also be attended by High Representative for Foreign Policy and Security Josep Borrell, President of the European Parliament David Sassoli, representatives of the European Bank for Reconstruction and Development, the World Bank, the European Investment Bank and the Regional Cooperation Council.

The participants will accept the Zagreb Declaration, which will confirm the European perspective of the Western Balkan countries.

More specifically, there is nothing in the text about enlargement, and several EU officials told the conference that enlargement was not a topic but an EU assistance package.

Some countries, by the way, are rather skeptical of further enlargement, such as Denmark, the Netherlands, Sweden, France and, to a certain extent, Germany, HINA said.

The interlocutors agreed that, in the context of a coronavirus pandemic, the EU and the Western Balkan countries were directed at each other.

Vucic thanked for the significant EU assistance to Serbian residents, while Michel emphasized the solidarity Serbia showed by providing assistance to Italian residents and assisting in the Western Balkans region.

A European official said that the European Union is committed to the European perspective of the Western Balkans and further strengthening and intensifying its support for political, economic and social reforms in the region.

The European Union has allocated € 3.3 billion to help the region, given the consequences of COVID-19 on the Western Balkan economies, the President of the European Council said.

The two interlocutors also discussed the next steps on Serbia's European path.

President Vucic said that Serbia is continuing the reform process with the aim of joining the European Union.