Stefanovic: President is entitled to revoke classification of any document

Interior Minister claims that Serbian President, Parliament and Government has the right to revoke the classification of any secret document 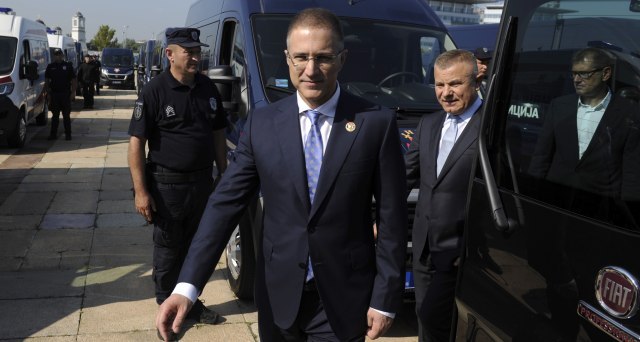 Nebojsa Stefanovic added that it was in the public interest to reveal that Aleksandar Vucic was wiretapped and under surveillance.

Stefanovic said that it was not the point that the President read out a classified document on TV, but that he was under surveillance and being wiretapped.

"Not only is the president entitled to this because it is a document that concerns him personally, but the question is how it was not an issue that we have been told for days that this wiretapping never happened, trying to convince us how crazy we all are. And then, when he comes out with the truth and reveals the identity of those persons, and the ways they did it, proving that he was monitored and wiretapped for years, nothing happens", Stefanovic said.

He finds nothing wrong with the president providing information that is in the public interest, as the president revealed the contents of documents concerning him.

"Serbian president told the truth and proved it to be true. All other persons mentioned are no longer in Serbia or do not hold public posts or had given him permission to disclose their names, since they were subject of the interest of the security services and they were under surveillance due to their communication with the President", Stefanovic stressed, noting that it was in the interest of people to find out about this.

"Why is this more bothering than the fact that someone is being monitored and wiretapped?", the Minister of Police wondered.

He reiterated that the President had the right to revoke classification of any document and disclose its contents in a public address.