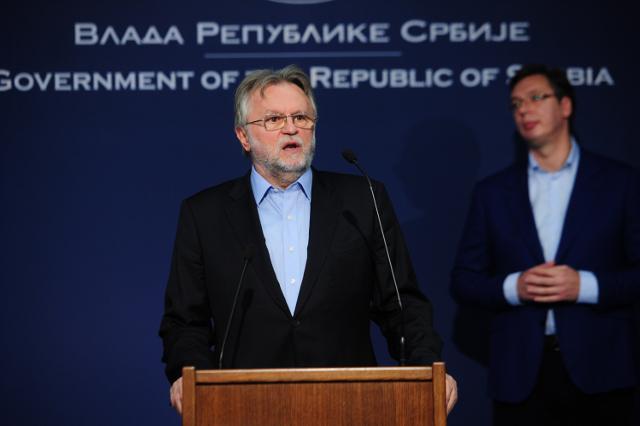 Vucic told at a press conference that as of January 1 pensions will be increased "between 1.5 and 1.7 percent" and that the talks with the IMF were "long and difficult, due to the caution of the financial institution."

He also "expressed his gratitude to all the citizens of Serbia who believed that the government will do everything in the best possible way" and "reminded that the agreement with the IMF was that salaries and pensions remain frozen for three years, while they increased already last year."

"I think we have achieved great results that we are proud of, and they will be recorded in history. We have a slightly larger surplus due to debt repayment and we will work to continue that," the prime minister said.

According to Vucic, from January to September revenues exceeded the plan by RSD 81.5 billion or EUR 650 million more.

The share of public debt to GDP ratio was 70.8 percent, he said, adding that it will not exceed 73.5 percent, but will be reduced.

Vucic warned that there are a lot of problems with several public companies, primarily with Azotara, MSK, Petrohemija, while the biggest problem is RTB Bor.

He announced that at the summit of China and 16 countries of Central and Eastern Europe he will speak with the Chinese Premier on RTB and that he will ask for help regarding the takeover of RTB Bor by a Chinese company.

For the first time, EPS has EUR 500 million in its account, so there are no problems with cash flow of that company, he said adding that the situation is improving Railways as well.

Minister of Finance Dusan Vujovic said that the budget for 2017 will be adopted on time in mid-December.

Vujovic said that we are already in the framework of a structural reduction, noting that the figure is at 3.89 percent compared to the planned four percent.

He underlined that we are almost where we need to be in December 2017 when the program with the IMF ends.

Fiscal performance has surpassed expectations, he said noting that the aim after 2018 is to have a sustainable and inclusive growth, which will be reflected positively on all.

Our growth rate is increasing, and forecasts are changing up, the Minister said and recalled that only this year the IMF raised its growth forecast from 1.75 percent to 1.8 percent, and later to 2.5 percent.

We expect GDP growth to be 2.7 or 2.8 percent, the Minister said, adding that in the coming years it is expected to grow at least by three percent.