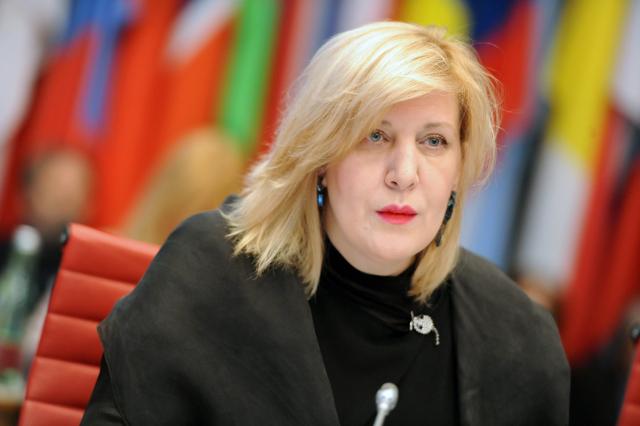 Mijatovic was invited to speak before the Parliamentary Assembly of Bosnia-Herzegovina and participated in a debate on freedom of expression and media freedom, "in which she stressed that journalists’ safety must be high on the political agenda and that the vicious cycle of impunity must be broken," the statement said, adding that the debate was organized by the Joint Committee on Human Rights of the Parliamentary Assembly, in cooperation with the OSCE Mission in Bosnia-Herzegovina.

“The mounting number of attacks against journalists must be addressed at the highest political level in order to reverse the rapidly deteriorating trend for journalists’ safety in Bosnia and Herzegovina. The fight to end impunity is instrumental in this respect; the majority of the attacks have not been fully investigated by the authorities and the perpetrators remain at large," stated Mijatovic.

She also "pointed to the urgent need to ensure independence and sustainability of public service broadcasters and regulatory agencies as key elements to strengthening media freedom in the country."

While in Sarajevo Mijatovic also participated in the European Federation of Journalists’ General Meeting and delivered a keynote speech.

“Any rational discussion about the state of media freedom must begin with an analysis of the state of the safety of journalist. It is unacceptable that journalists every day are being attacked, threatened and intimidated for what they say or write," Mijatovic told some 100 delegates from journalist federations from across Europe, the OSCE announced.

In her keynote, Mijatovic "pointed to the growing number of online threats against journalists and expressed particular concern about how female journalists are being singled out and targeted," and added:

“These online attacks tend not to address the content of the articles but instead degrade the journalists as women. For some female journalists, online threats of rape and sexual violence have become part of everyday life; others experience severe sexual harassment and intimidation. Misogynist speech is flourishing.”

Mijatovic also addressed the connection between security and free expression and free media, which has fundamentally changed following the recent horrific terrorist attacks that have struck Europe, the OSCE statement said, quoting the representative as saying:

“This has contributed to a situation where the future of free expression and media freedom could be dictated in large part by security concerns. The core issue here is how to properly protect freedom of the media and freedom of expression while fighting threats to our societies.”

Mijatovic said the wave of new anti-terrorist legislative initiatives throughout Europe "has made reporting more dangerous and journalism a more exposed profession."

New anti-terrorist laws are increasingly criminalizing almost any disclosure of classified information, which has made reporting on terrorism itself a dangerous activity, she said.

“This makes it difficult for journalists to reveal stories that might be in the public interest in the area of national security, intelligence and law enforcement, where information is sensitive, but not necessarily classified,” Mijatovic said.

“I do recognize and fully respect the importance of any government’s legitimate security efforts and preventive measures, but all measures aiming to increase security must be accompanied by meaningful counterweights protecting human rights such as freedom of expression and media freedom,” she said.