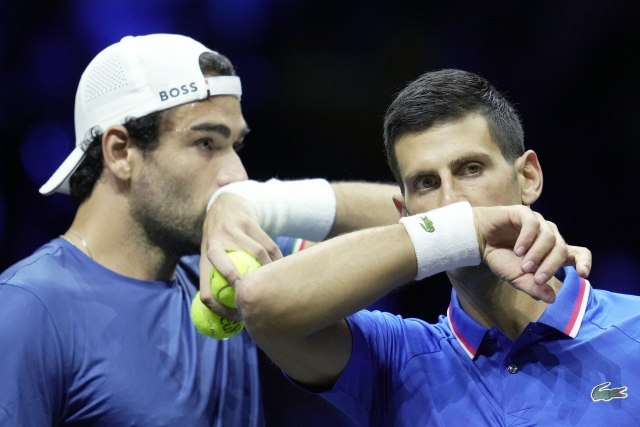 Novak Djokovic was relentless out there tonight and has played a big role to give Team Europe an 8-4 lead going into the final day of this year’s Laver Cup.

The Serbian and the Italian were better after less than an hour and a half of the game, in sets - 7:5, 6:2.

Djokovic and Berrettini thus increased the advantage of Team Europe after two days of play at the Laver Cup to 8:4.

It was the second victory in a row for the Serbian tennis player, since he defeated Frances Tiafoe in singles just 20 minutes before the start of this duel, thus bringing two triumphs to Team Europe in just two matches, and both without losing a set, a total of 4- 0!

Europe took advantage of the fact that Novak came on court still warmed up from the previous match and a break was made at the very start.

Both Matteo and Novak were confident in their games, one bad decision by the judges probably cost them a double break, but the score was 5:2. And then, the eclipse. Desperate game by Berretini and not long after it was 5:5.

The opponent's series was interrupted by Djokovic, and then things went back to normal - the Italian and the Serb joined forces and made a new break at the end of the first set.

What it means 🔵#LaverCup pic.twitter.com/JjF1EHHpSv


Team World got its opening service game in the second set, but ran into problems in the next one. De Minaur missed the smash, sent a forehand into the net and Team Europe broke. The Australian and the American didn't even think about a break, and then in the eighth game they lost their game again and that was the end for them.

“I enjoyed it a lot,” said Djokovic after the match.

“It was the perfect team I guess. I don’t play doubles that much and it’s a completely different game".

“You have to rely in your partner and come up with a strategy that is good for both of you. I’m really glad. Matteo helped a lot with his great serve. We couldn’t ask for a better day for Team Europe”, Djokovic concluded.

Berrettini added: “It was great and a huge honour to play on the same side of the net. I had to play against this guy in the past and it was tough. Today was a lot easier!”