BELGRADE -- President of Serbia, Aleksandar Vučić, took the oath in the National Assembly for the second presidential term.

BELGRADE -- President of Serbia, Aleksandar Vučić, took the oath in the National Assembly for the second presidential term. 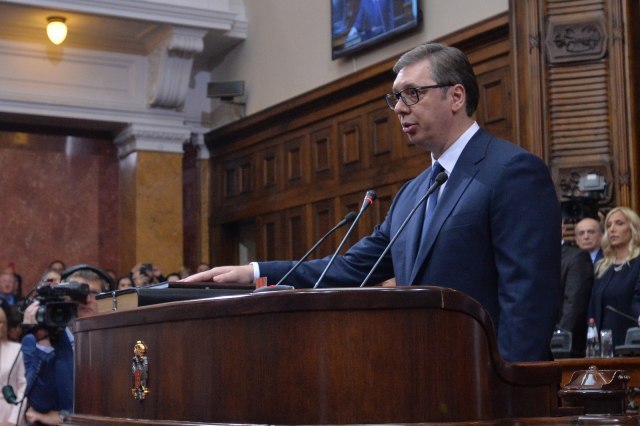 Siniša Mali congratulated Vučić: "I know how dedicated you are in fighting for our beautiful country"

After taking the oath in the parliament and starting his second term, the president went to the building of the Presidency of Serbia, and from Nikola Pašić Square to Andrićev Venac he was accompanied by applause from the gathered citizens.

He also thanked the Krajina group for their support, who greeted him with a song in their traditional costume. Vučić then went to his office at Andrićev venac, and was greeted by the citizens gathered in the Pioneer Park.

The Guard of the Serbian Army was set up in front of the building of the Presidency, as well as representatives of all branches of the Serbian army, and the Chief of the General Staff of the Armed Forces, General Milan Mojsilovic, handed over the report to President Vucic.

"Thank you for this magnificent honor, and I want to extend gratitude to the people who wanted me to lead our country for the second term. Thank you for the huge support," Vucic said on behalf of the Presidency.

He said that we are facing big and difficult decisions - whether we will have peace and stability. "Please perform your duty diligently and responsibly. Thank you for everything you have done in the past five years. Now comes the difficult five years, it is not easy to maintain peace and stability, but with such soldiers and aware citizens who know there is no greater value than freedom, I am convinced that we will preserve peace, stability and freedom. Long live the Serbian Army," said President Vučić, who then entered the building on Andrićev venac.