BELGRADE -- Today, President of Serbia, Aleksandar Vučić, will take the oath in the National Assembly for the second presidential term. Follow live on TV B92 and B92.net.

BELGRADE -- Today, President of Serbia, Aleksandar Vučić, will take the oath in the National Assembly for the second presidential term. Follow live on TV B92 and B92.net. 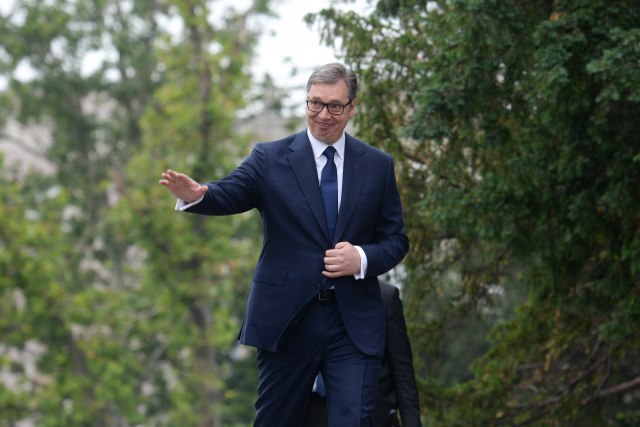 A special session of the parliament is scheduled for 11 a.m., and a special session of the Assembly will be attended by representatives of the Government of Serbia, Republika Srpska, judiciary, army and police, religious communities, as well as 75 representatives of the diplomatic corps. Before the inauguration, Vučić addressed the gathered citizens.

The President of Serbia thanked the citizens for the great support and trust they showed him.

The text of the oath is stated in the Constitution, and reads:

"I swear that I will dedicate all my efforts to preserving the sovereignty and the entire territory of the Republic of Serbia, including Kosovo and Metohija as its integral part, as well as exercising human and minority rights and freedoms, respecting and defending the Constitution and laws, preserving peace and prosperity of all citizens of the Republic of Serbia and that I will conscientiously and responsibly fulfill all my duties".

The oath taken by the president is another guarantee that Kosovo and Metohija is an integral part of Serbia, and the president explicitly swears to keep the southern province as an integral part of the country. For the first term, Vučić took the oath of office on the Constitution and Miroslav's Gospel, the oldest Serbian book. On April 3, Vučić won the first round of the regular presidential elections with 58.59 percent of the total votes.

His first term began on May 31, 2017, when he was solemnly sworn in at the House of the National Assembly.

Atmosphere in front of the National Assembly

Vučić addressed the citizens in front of the Assembly

"There are no higher honor and obligation for me, because I lead the most beautiful country in the world. I could never do that without you. Together we got 1.5 million votes more than those who tried to beat us, because you can't deceive people. I will not act in a way that satisfies their interests, but I will work in their interests, which means that you will not agree with my decisions sometimes, but it also means that we will preserve peace and stability, Kosovo and Metohija and the future of our country and our children", said Vučić to the gathered citizens in front of the Assembly, asking them to go home because it is raining outside.

Serbs from Kosovo and Metohija in front of the Assembly: Supporting Vučić, for better or worse

Serbs from Kosovo and Metohija arrived in Belgrade to support the President of Serbia, Aleksandar Vučić, who is taking the oath of office for the second presidential term in the National Assembly today. The citizens, who left the northern part of Kosovska Mitrovica and Leposavic by bus at around 3 a.m. this morning, gathered in front of the Assembly, where they were joined by political representatives of Serbs in the southern province and officials of the Serbian List. They point out that it was not difficult for them to travel five hours to the capital to support Vučić, who, as they say, is always with the Serbian people in Kosovo and Metohija.

Sladjan Radovic from Leposavic points out that Serbs in Kosovo and Metohija have the support of Vucic in everything and that they have confidence in him. "We expect to live peacefully and the issue of Kosovo and Metohija to be resolved once and for all," Radovic told reporters.

They will be able to follow the ceremony of taking oath on a video beam placed on the plateau in front of the Serbian Parliament, where citizens from other parts of Serbia gather. Today, President of Serbia, Aleksandar Vučić, will take the oath at a special session of the National Assembly, which is scheduled for 11 a.m.