BELGRADE -- The semifinal matches of the Final Four of the Euroleague have ended: Anadolu Efes and Real Madrid will fight for the championship title.

BELGRADE -- The semifinal matches of the Final Four of the Euroleague have ended: Anadolu Efes and Real Madrid will fight for the championship title. 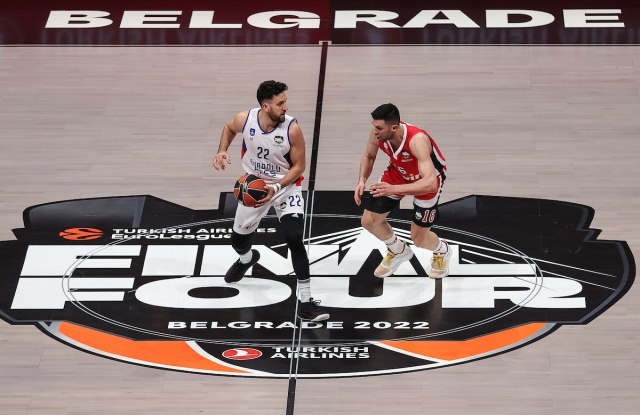 The final Euroleague tournament Final Four is being held in Belgrade for the second time and again in the grand final we have one Turkish team and one Spanish team, but the Spanish team will be the same as in 2018 - Real Madrid.

At that time, the Madrid residents on the wings of Luka Dončić, Fabien Causeur, Anthony Randolph were better than Fenerbahçe, led by Željko Obradović, and won the jubilee tenth championship title with a score 85:80.

Just to recall, Causeur was then the "X Factor" with 17 points scored, while Luka Dončić scored 15, but because of his excellent game in the semifinals and in the finals, he received the MVP of the Final award.

Doncic is now playing for the Dallas Mavericks in the NBA league, and Causeur is again in the Real Madrid jersey in Belgrade, as we say, "at the crime scene" again.

Again, the French basketball player was fatal for the opponent, and this time the opponent was the eternal rival of Real Madrid, the Barcelona team.

The Real Madrid basketball players advanced to the Euroleague finals with a 86:83 victory over Barcelona in the full Arena, but it should be realistic to say that most of the spectators were Olympiakos fans. They watched the defeat of their team by Anadolu Efes, and the player who saddened them was the Serbian national team player Vasilije Micic, who brought the Istanbul team a new final with a triple with the sound of a siren, the third in four years.

Madrid interrupted a series of five defeats by Barcelona in Belgrade and took revenge on them in the most important match of the season - after the team led by Šarūnas Jasikevičius had a double-digit advantage on several occasions.

About the match itself, Micic said:

"An interesting game all in all. We were lucky that Shane Larkin was in a great mood at the beginning, he kept us in the match all the time. We didn't panic, nor make any hasty mistakes", Micic summed up his impressions.

Anadolu Efes and Real Madrid will fight for the Euroleague trophy on Saturday at 7 p.m., and we will see who will leave the "country of basketball" or the "country of MVPs" with a smile, as the recently published Euroleague documentary read.