ROME -- World No. 1, Novak Djokovic, believes that he is one of the main candidates for winning Roland Garros.

ROME -- World No. 1, Novak Djokovic, believes that he is one of the main candidates for winning Roland Garros. 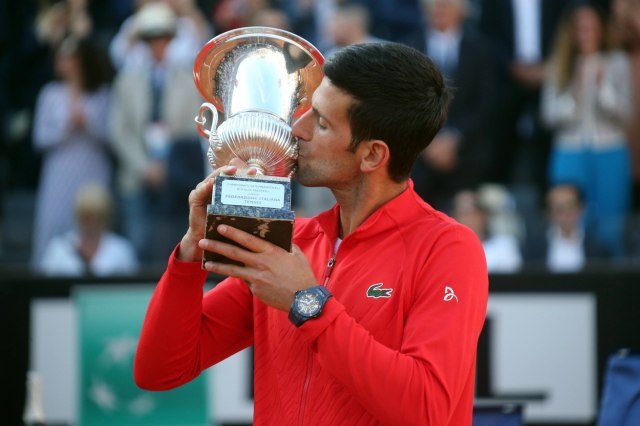 “I pleasantly surprised myself I can say. I had a clear game plan and I knew what to expect, so I knew what I had to do, but I did play a perfect first set," Djokovic said in his on-court interview. "After that it was a little tighter. At this level, one or two points can turn a match and he was then back in the game at 4-1 up".

“The match could easily have gone to a third set but I managed to find the right shots at the right time to come back into the match. The tie-break I was maybe an inch better, but it was a tight, tight tie-break for both of us."

“Two days ago I played great,” Djokovic said. “I have been building my form for the past couple of weeks and I knew that my best shape on clay usually comes around Rome time, so it could not be better going into Roland Garros with a title.”

Djokovic won his first title of the season in Rome after one hour and 37 minutes.

"Considering how I've been playing in the last few weeks, I think I'm one of the favorites on Roland Garros. I don't think too much about who has the most chances, I always think about myself. I'm going to Paris with the highest ambitions, especially after this tournament. I think I have chances. Of course, we have to see the draw, we can't influence that, but that will also determine my road. It's different - on three sets won, matches every other day, the approach is different. I think I can go far," Djokovic said.

He briefly referred to the period before this tournament, especially Monte Carlo, where he played ill.

"I think I'm physically really good starting from Madrid. I worked a lot on fitness between Belgrade and Madrid, but it was the consequences of illness, not a lack of fitness. Now I feel perfect," added the world's no.1, who won the record-extending 38th Masters 1000 title in his career.

Not a bad week for @DjokerNole in Rome! 😏@InteBNLdItalia #ibi22 pic.twitter.com/TIsWyx2qSB