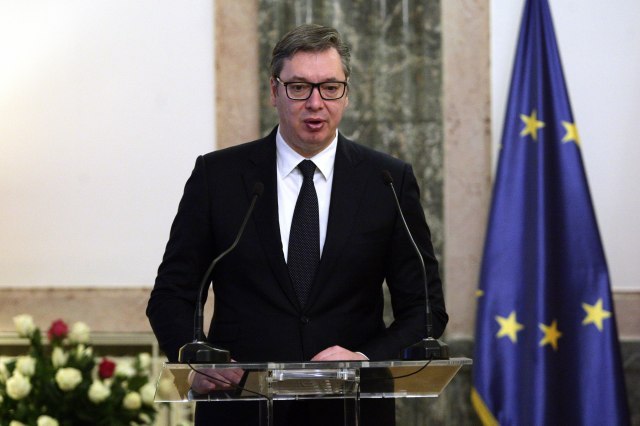 He reiterated the attitude of our country in terms of Ukrainian crisis, presented in the conclusions of the National Security Council.

"It seems to me that we started important topics from bilateral relations through the conversation with senators. We had a good conversation that deepens our cooperation", Vučić said to the press, after handed over the Order to Ladislav Harman.

He conveyed that he talked with the senators about topics that, he says, are neither easy nor simple for us - about Ukraine, the West's attitude towards Russia, Serbia's positioning.

"I reiterated the positions of Serbia that were taken in the conclusions of the National Security Council, which were adopted by the government," Vucic said. He expressed confidence that Serbia will continue further cooperation on all key issues and further improve relations with the United States.

As he said, Serbia will consider all Brussels recommendations.

"We've heard a lot of smart things, but we always follow our interests. If they can't do a thing to Moscow, they would take out their anger on Serbia, I congratulate them on it," he said. The European Parliament will urge Serbia in the new resolution "to show real commitment to the values ​​of the European Union and to align with EU foreign policy and positions, including imposing sanctions to Russia".

RFE said it had access to the draft resolution authored by rapporteur Vladimir Bilčik, which will be debated by the European Parliament Foreign Affairs Committee on Thursday.

According to the Resolution, the European Parliament will express regret due to the fact that Serbia has not aligned with EU sanctions after the Russian attack on Ukraine, RFE reports.

President of Serbia, Aleksandar Vučić, pointed out today that Belgrade hopes to continue the dialogue at a high level, but that he is very worried about all kinds of threats coming from Priština.

In a statement to the press, Vučić said that he told the EU envoy for dialogue between Belgrade and Priština, Miroslav Lajčák, with whom he met yesterday, that he was worried about threats, disrespect of the Brussels agreement, i.e. lack of desire to fulfill what was agreed, but also due to the occupation of power plants, and violent behavior in connection with the license plates.

"My request to Pristina and the EU is to take into account those who talk about their vulnerability every day, and the only thing they aim at is an attack on Serbs, additional pressure on Serbs and further actions, especially in northern Kosovo. We ask them not to do that. It is important for the stability of the region, for all our people, both Serbs and Albanians, to preserve peace," he pointed out.

“A free man and free country does not take decisions based on ultimatums and force but on the basis of what they are protecting and we are protecting our country and our citizens,” Vucic said.

“Does this bring problems? No doubt a lot of problems from financial investors to a lot of others. There is no doubt that we are paying a very high price,” he told reporters.

"Serbia is responsible and committed to peace, which cannot be said for everyone else," Vucic said. Many, he says, have no understanding for Serbia, because 1999 means nothing to them. "They cannot and will not understand Serbia's position in the UN, where we have always had the support of Russia in the Security Council, and not those countries that would force us into a policy of sanctions today," Serbian president said. Our position, he says, is much more complex and difficult:

"Who wants to understand - he will understand, who will not - will not," said Vucic. He added that he was grateful to the leaders of the European Union for their understanding of Serbia, because they derogated part of the sanctions against third countries and enabled us to import oil via JANAF. He added, however, that there is blame for the decline in support for Serbia's European path among the citizens on "our side", due to insufficient determination and not always clear sending of messages.

"We can criticize someone, but we must make it clear what our strategic path is," Vucic said. He added that one of the reasons is that people in Serbia often hear words from the EU that mean pressure on Kosovo, or on the imposition of sanctions on Russia.

"A significant part of people are against that, 76 percent are against sanctions, and 13 percent are in favor." And when you network all that, then it is relatively easy to explain why the popularity of the EU is declining", Vucic concluded.