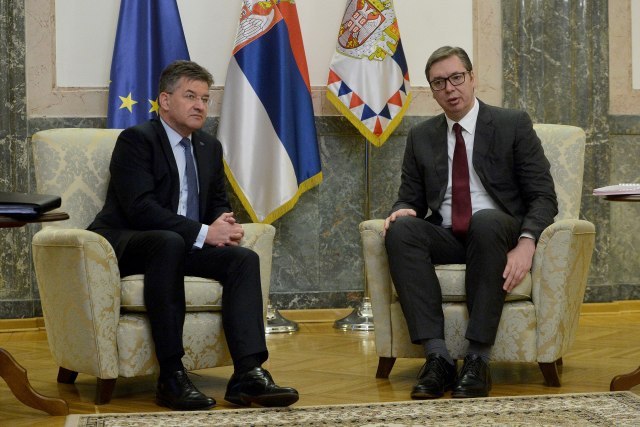 Vučić met with the Special Representative of the European Union for Dialogue between Belgrade and Pristina and other regional issues of the Western Balkans at noon in the building of the General Secretariat of the President of the Republic.

He talked with Lajčák about the resumption of the dialogue between Belgrade and Pristina, and especially about the importance of the Brussels Agreement, which was signed nine years ago.

The President said that nine years had passed since the signing of the Brussels Agreement, and that there was still no progress in the implementation of the obligations undertaken by Pristina, primarily in connection with the establishment of the Community of Serbian Municipalities.

EU Special Representative for Belgrade-Pristina Dialogue and Other Western Balkans Regional Issues Miroslav Lajčák said he would continue to be fully engaged in continuing the EU-led dialogue without further delay, adding that EU members expect the two sides to implement everything agreed within the dialogue process of the last ten years. President Vučić pointed out that Serbia supports the activities, efforts and intentions of Miroslav Lajčák to reach a solution through a policy of compromise, without ultimatums and imposed solutions, in order to show understanding for its state and national interests, and not only for the national interests of Albanians.

The President thanked Miroslav Lajčák for his dedication, adding that he is always welcome in Serbia, Office for media relations of the President of the Republic of Serbia announced.