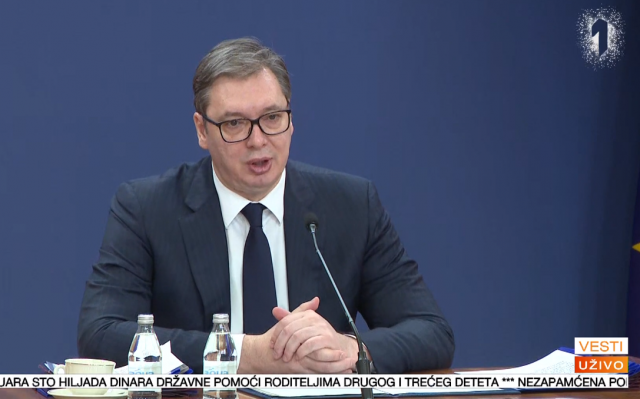 He presents Serbia's development plans for next year, within which he announces new investment and development projects.

"I will start with children, with young people," said Vucic.

"People were dying in large numbers, there were those from cardiovascular diseases, children were born a little less than in previous years, that is a consequence of coronavirus and many other things," he said. "We will change the laws in which we will introduce measures for the protection of women, we will do that with the non-governmental sector," he said.

"We are considering at this moment how and in what way to fight against peer violence. Today, it is clearer because you have phones where boys and girls record violence and are proud of it, we must prevent that and fight it," he said.

He also announced a new financial aid that will be sent to young people.

"I invite people to take part in the referendum"

"I call on people to participate in the referendum. It is not a party and political referendum. I know how many problems we have because of that referendum and in my party because they do not want the state to be deprived of its competencies," he said.

"Will we really try to have an independent prosecutor's office and judiciary?" he asked.

As he said, regardless of who is in power, we can always be proud of the independent prosecutor's office, that is the essence of the referendum.

"It is very devastating for me that they do not allow either Veljko Odalović or Petković to enter Kosovo and Metohija, because they are behaving in such a way as to provoke an incident and then seek support," he said.

"There will be no referendum in Serbian communities, and I will ask the international organizations to answer whether they will support if Serbs refuse to participate in the elections in Kosovo and Metohija," he said.

When asked by journalists about obstetric violence, he said that one should not speak in such a general way, but that such crimes require specific names and surnames and that such people must be arrested.

He called on all citizens who have experienced this to report it and will see the quick reaction of the competent authorities.

Of course, I am afraid because when you have politicians who do not behave rationally and responsibly, I am worried about the fact that they do not have eight to ten hours a day and I expect there will be political turbulencies. We do not have much choice, we are cornered. We should be a factor of stability and peace, but I'm not sure we can expect that from them", he explained.

"Pristina and Zagreb have already established a completely visible pact, from the media to the military-police, it is not a secret. Because there is no Serbia that would be small enough for them without being great," Vucic said.

"I have never responded to the accusations from Sarajevo. I want to inform every Bosniak from the territory of BiH that there are no secret indictments," he said.

"I call on Bosniaks to come to Serbia, there are no secret indictments, don't let them lie to you. We have done everything we need to do to stabilize and preserve peace," he said.

About Godfrey's statement on Serbia's arming itself

"I have great respect for U.S. Ambassador Godfrey, so I was surprised by this statement. Everyone is arming themselves as much as they can. Hungary, Romania, Bulgaria, everyone is arming themselves... But I wonder if the U.S. Ambassador asked how Serbia would react when the USA donate weapons to Croatia? How come they didn't wonder when the Germans sold 16 howitzers to Croats? Our army is growing," Vucic said.

He said that Serbia had not violated any agreement and that by strengthening the army he was working on its strength, but not endangering others. Vučić also spoke about the work of the Minister of Finance Siniša Mali and said that he is the best Minister of Finance in the region. He went on to talk about the so-called blacklists of the United States, and said that anyone who has any information should file a criminal complaint.

"As for my willingness to go to the polygraph, I am always ready for that. To remind you, I was on the polygraph, and if you call those who destroyed the country, none of them will. Pajtić, when he told untruths, I was on polygraph, and he is not. Well, then there are theories on your TV stations that the polygraph is not important, meaning that it is not valid in court", explained Vučić.