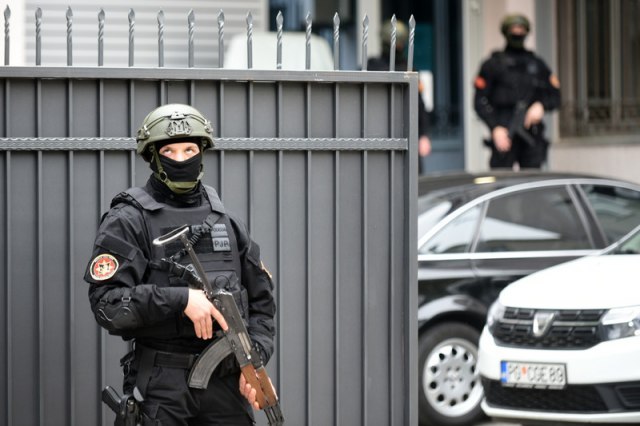 According to the Montenegrin media, the man in question is Edin Begzić. Some also reported that he broke into the bank building. The police evacuated a part of the street in Bar because Begzić says that he will activate the explosive in front of the NLB bank in that city.

Begzic was armed with explosives, a gun, Molotov cocktails, and before this attack, he left a message on YouTube.

"If this video saw the light of day, it means that I succeeded in my intention to take over the thieving branches of NLB Bank in Bar. This bank, with the help of the state and its institutions, stole money from honest poor people and workers of Primorka from Bar back in 2010. Nothing is happening on that issue," he said in a video message.

He asked political parties and politicians "to leave them alone" and "not to score political points on them". "If you had done your job, we would not be in the position we are in," the message said, lasting just over 25 minutes. "I have a great intention to fight to the end, I will have a mask for protection against tear gas and smoke, a bulletproof vest, a pistol with bullets, Molotov cocktails and two improvised explosive devices with a remote control, so to speak. There will be nail bags on the devices in case of an explosion", he said in the video.

Begzić stated that he would keep NLB Bank under control until that bank pays the money it owes to the workers of Primorka.

He sent a message to Deputy Prime Minister Dritan Abazovic that if he sent private security, the army or the police to "attack the workers", he would be responsible for the "chaos that ensues".

The bank issued a statement

The employees and clients of NLB Bank, which is located in Maršala Tita Street in Bar, are safe, it was announced from this bank.

This branch is not open this morning. "The reasons for the attack have not been fully clarified, and the bank is making itself available for cooperation with the police and all state bodies so that this unpleasant event would have a positive outcome for the benefit of citizens living in the street where the Bank's branch is located," the bank said.

They add that they believe that coordinated police activities will contribute to resolving the attack in a peaceful way and without endangering human lives, and that the public will be informed about everything by the police.

Sekulović also says that he cannot predict how the current situation will be resolved. At an extraordinary press conference, Sekulović said that he hoped for the best outcome.

"The primary thing that needs to be done is to understand the situation and without the use of coercion, this person will react. Units have been sent to be there, there are people who are competent to deal with this situation," Sekulovic said for Podgorica media.

He did not want to answer the question whether the man who introduces himself as Edin Begzić was previously known to the police in order not to create a negative image.

"Vijesti" was told from the Operational-Communication Center of the Police Administration that the person had previously affixed the inscription "Return the money you stole from the workers of Primorka" to a bank branch.

Police are currently negotiating with him, and Interior Minister Sergej Sekulovic said the situation was complex. "There are people who are competent to deal with this situation," said Sekulović. There are no bank employees in the branch.

Before the beginning of the working hours of the branch office, Begzić told the workers "to take shelter" and not to enter their work premises, reports the Feral portal.