BELGRADE -- Today, President of the European Commission continues her visit to Belgrade as part of her touring the Western Balkans region.

BELGRADE -- Today, President of the European Commission continues her visit to Belgrade as part of her touring the Western Balkans region. 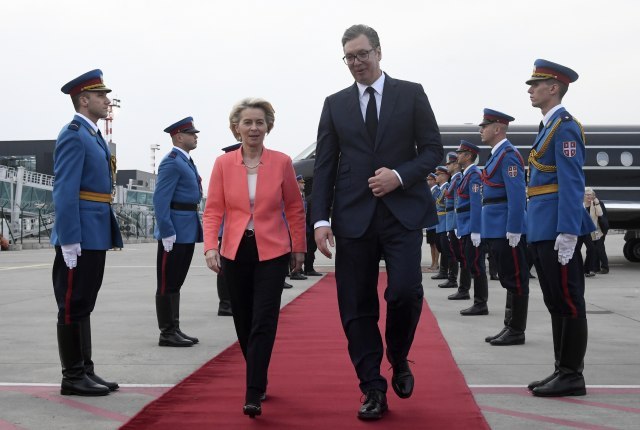 Today, she will meet with the Prime Minister of Serbia, Ana Brnabić, and participate in the launch of the project on the railway Corridor 10.

Von der Leyen arrived in Belgrade last night, and was greeted at the airport by President Aleksandar Vučić, after which the two officials had talks at the "Mir" Villa.

This morning, together with President Vučić, von der Leyen will participate in launching the project on the railway Corridor 10. It is also planned that she will attend the signing of the contract for the rehabilitation of the section of the Peace Highway (Niš-Priština) with financial support from the European Union.

Von der Leyen began her tour of the Western Balkans on Tuesday with a visit to Tirana, then went to Skopje, Pristina and Podgorica. After the meeting with the Prime Minister of Kosovo, Albin Kurti, she said that Pristina and Belgrade should develop a constructive dialogue and lower tensions in the north of Kosovo.