BELGRADE -- German Chancellor Angela Merkel said today Kosovo issue will not disappear, so it must be resolved, but some issues will be resolved at the end of a process.

BELGRADE -- German Chancellor Angela Merkel said today Kosovo issue will not disappear, so it must be resolved, but some issues will be resolved at the end of a process. 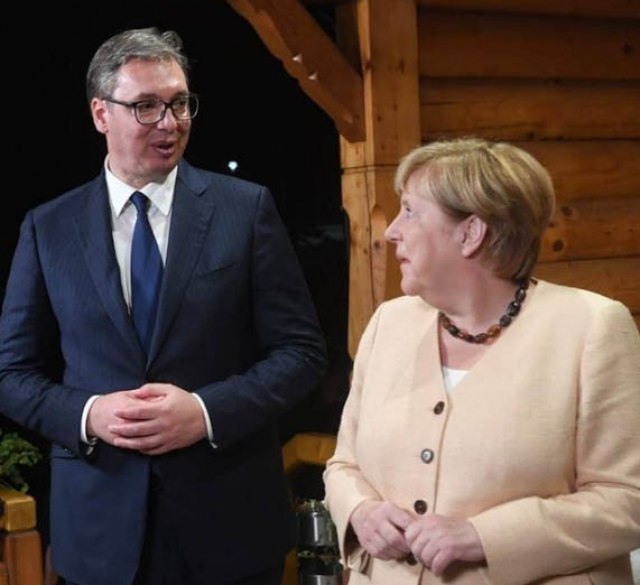 When posed the question by German journalist, that a decade ago, when Chancellor Merkel was in Belgrade, it was on the agenda that Serbia must recognize Kosovo if it wants to join the EU, and whether that is an inevitable condition, she stressed that some issues will be resolved in the end of the entire process.

"Not all EU members have recognized Kosovo. It must be resolved in order for the states to resolve EU accession. I had a pragmatic approach," she said during her address. "There is no point in talking about the end of a process before solving other problems. This issue will not disappear, it must be resolved. But I am for a roadmap where all other issues are resolved first. I hope we will have new progress in the process around Kosovo," she explained.

She said that Germany, based on its history, knows very well that it takes time to resolve such issues, and reminded how long the unification of Germany lasted, until we came, as she said, to the agreement.

President Vučić said that Serbia knows what the condition for joining the EU is, that it is resolving relations with Priština. "We do not hide it from our public. And tonight, when everyone is closely following this visit, I will not deny it with a single word. That is why we are conducting a dialogue in a serious way," he explained. Vučić pointed out that, as it is heard that Priština has its own constitution, so does Serbia and it must respect it.

He underlined that Serbia is ready to discuss all compromise solutions, to discuss relations, and before that to agree that we have a free flow of goods, services, money and people, to bring people closer, because then it will be easier to find a solution.

"If the question is whether we are aware that we will not enter the EU before resolving the Kosovo issue - it is absolutely clear," he said.

Vučić said that he openly talked about this issue with Merkel, both when they agreed and when they did not agree on it.

"I have tried to always be open to you and to her. I am against the frozen conflict, and I don't think that is the solution. Nobody will be happy in Serbia with my words. I think it is good for this generation to solve this, but it must be a compromise solution, not a solution that would humiliate or defeat one side", he concluded.