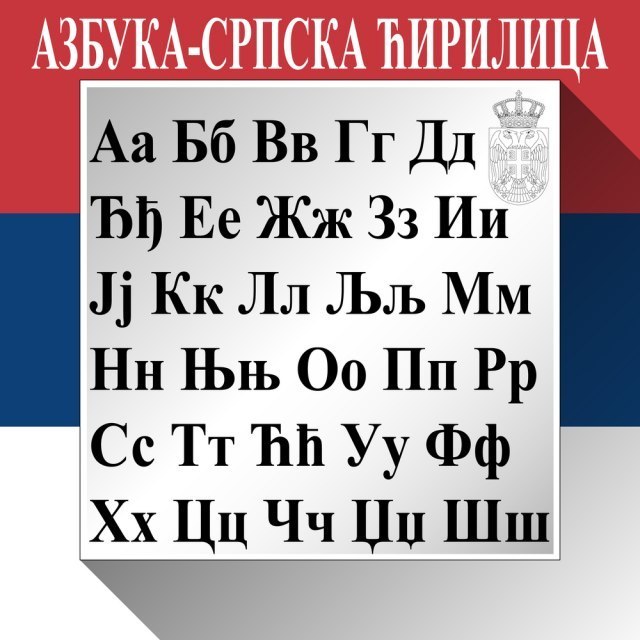 The main provisions of this law, the draft of which was handed over by the President of Serbia Aleksandar Vučić to the Serbian member of the Presidency of Bosnia-Herzegovina Milorad Dodik in Belgrade yesterday, have the key goal of nurturing, preserving and promoting the Cyrillic alphabet as a stronghold of our national identity. Special emphasis was placed on promoting its wider use in public life, given its historical, cultural and identity significance.

According to the draft law, which "Novosti" had access to, all state and local bodies in Serbia and Republika Srpska, public companies, schools and faculties, as well as companies with majority public capital and associations operating at the national and international level will in the future be obliged to use the Serbian language and the Cyrillic alphabet in their work.

The public media institutions RTS and RTV will also be obliged to do that. Mandatory use of Serbian language and Cyrillic, as the main alphabet, according to the draft law, includes legal transactions and printing of names, headquarters, activities, names of goods and services, instructions for use, information on properties of goods and services, warranty conditions, offers, invoice, bill and receipt.

Moreover, cultural and other events that are financed or co-financed from public funds will have to have a logo written in Cyrillic. In addition to expanding the circle of bodies and institutions that will be obliged to use the Cyrillic alphabet - to all those who operate or perform activities with a majority participation of public capital - the draft law also envisages a package of incentive measures for the private sector. This primarily refers to business entities and privately owned media, for which special regulations may establish tax and other administrative reliefs that decide to use the Cyrillic alphabet in the performance of their activities, which includes the use of the Cyrillic alphabet in electronic media and during publishing printed media.

After the meeting with Dodik, Vučić stated that they agreed that the cooperation between Serbia and RS is exceptional at all levels and that the Serbian people must not and cannot afford any conflicts, which would lead us back to the times gone by.