BELGRADE -- The session of the Crisis Staff for the fight against coronavirus, which started at 4 p.m. in the Palace of Serbia, has ended.

BELGRADE -- The session of the Crisis Staff for the fight against coronavirus, which started at 4 p.m. in the Palace of Serbia, has ended. 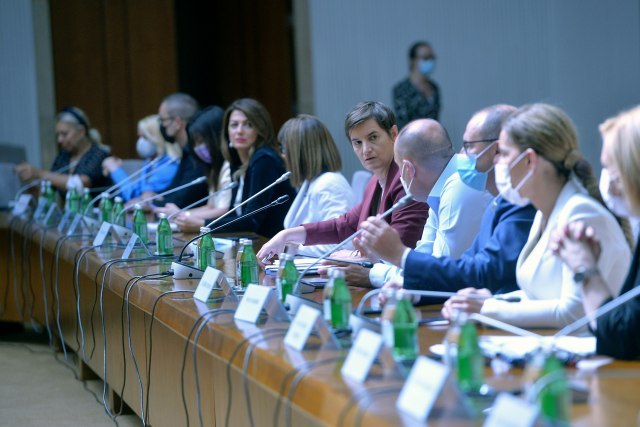 The current epidemiological situation, the introduction of the third dose of the vaccine for individuals, as well as possible new measures were discussed at the session.

At the just-concluded session of the Crisis Staff, it is unofficially known that it was decided to enable the giving of the third dose to especially risk groups.

The third dose will be recommended for citizens who suffer from certain systemic and other diseases.

After the session, Darija Kisić Tepavčević addressed the media, once again appealing to all citizens to be vaccinated.

"Every day we have a significant increase in the number of people who become infected and hospitalized," she emphasized.

Darija Kisić Tepavčević pointed out that there was a significant discussion about the third dose of the vaccine. People who have immune-deficient conditions should also be vaccinated with the third dose, six months after the second dose, because the length of their immunity from the coronavirus after vaccination is shorter.

She said that at this moment, it is a group that has been recognized that their immunity should be strengthened with the third dose, which should be given six months after the second dose.

"The virus is still there. It is the time of annual vacations, but the virus is not on vacation," said Kisić Tepavčević. She emphasized that the sessions of the Crisis Staff will be organized more often from today.

She appealed once again to everyone to be vaccinated and that the next measures will be adopted depending on the current epidemiological situation. "The end of the fight against COVID-19 is not in sight," she warned.

The greatest danger is at the end of autumn and during the winter. There is every chance that the situation with the coronavirus will be repeated as with the flu." Darija Kisić Tepavčević commented on the school year.

She said that it will exclusively depend on the epidemiological situation, what the school year starting on September 1 will look like, and that a final decision is expected a week before the start of the school year.

In the last 24 hours, a large leap in the number of newly infected people was recorded, so that today there are more than 300 new cases of coronavirus registered in Serbia.

In the previous days, experts warned of the growing number of newly infected people, as well as of the danger of a fourth wave in Serbia due to the weak response to vaccination in September.

The Prime Minister of Serbia, Ana Brnabić, recently announced that it is possible that a decision on the third dose of the vaccine will be made at the session of the Crisis Staff on the recommendation of the Expert Committee for Immunization.

One of the topics will be the start of the school year.

Tiodorović said that the organization of classes is already being considered, and that lower grades of elementary school students will go to school normally.

"The situation will be monitored among older elementary school students, high school students and students. They are the most important as a source of infection, and the important thing is that they will be able to endanger the elderly," he said.

The assistant director of the COVID hospital in Batajnica, Dr Jelena Veličković, stated that 58 patients are currently being treated in that institution.

Eleven of them are in intensive care, he says, adding that the increase in the number of patients admitted to the hospital, especially those with a more serious condition, is worrying.