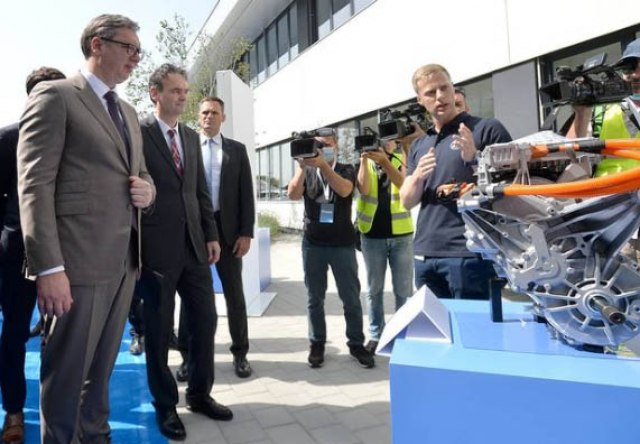 The president spoke to workers who showed him parts made for Mercedes and Volvo, among others.

Vučić wished them happy work and asked them individually where they come from to Pancevo for work.

During the tour, Vučić talked with domestic engineers at ZF Srbija, got acquainted with new technologies and possibilities of the most modern research center and wished them success in their work. The President inspected the modern equipment of ZF for testing, as well as the verification of electrical machines.

The visit was attended by the Head of research and development of the E-division of ZF, Otmar Scharrer, the general director of ZF Serbia, Milan Grujić, as well as the German Ambassador to Serbia, Thomas Schieb.

"I see incredible progress here in Pancevo, they have employed 900 people and there will be another 100 here in the development center," the President of Serbia said after the visit.

As he said, many employees moved to Pancevo, some even bought apartments, so the price of apartments jumped there.

"When we got ZF and when I mentioned that to Angela Merkel, she congratulated me, she was surprised," the president said, adding that he received confirmation of all that today, because everything looks like a pharmacy, not a factory.

"Without the participation of Serbia, cars like Volvo and Mercedes would not be able to exist, to move, because the drive parts are produced here," he pointed out. "ZF is a serious company and they are looking to the future, so they are already cooperating with the technical school in the dual education project," President of Serbia added.

"For me, the most important people are those who work for ZF," the President of Serbia pointed out, answering the question of journalists about the place for Serbian companies in ZF's business. “They have been trained for a year, it is our resource today, our people,” he explained, expressing gratitude to ZF. "They contribute to the growth of GDP in Serbia. It raises the whole city, these people live here", he added.

"We are becoming part of BMW," said Vucic. As he said, ZF's engines were made in Serbia, with our hands and German intelligence, and our people are acquiring that knowledge.

"This is a salvation and a cure for Serbia," said Vucic, talking about investments in Serbia like this German one.

"In the first 6 months, our deficit is lower than expected by one billion euros, I am happy because of the increased income, but I am not happy because of insufficient money spent on projects," said Vučić.

In mid-2019, the German company ZF (Cet-Ef) opened a factory in Pancevo for the production of auto parts and components for the automotive industry, ships and railways.

It was announced earlier that ZF will employ a total of about 1.300 people and that, in the second phase of the project, it will open a research and development center, where the best engineers will work and develop new technologies.

The location of the ZF division of the E-mobility division and the most modern development and research (R&D) center covers nine hectares in the northern industrial zone of Pancevo. It consists of 58.000 square meters of production facility and a development center of 6.500 square meters.

In 2019, ZF Serbia achieved a turnover of approximately 22 million euros.