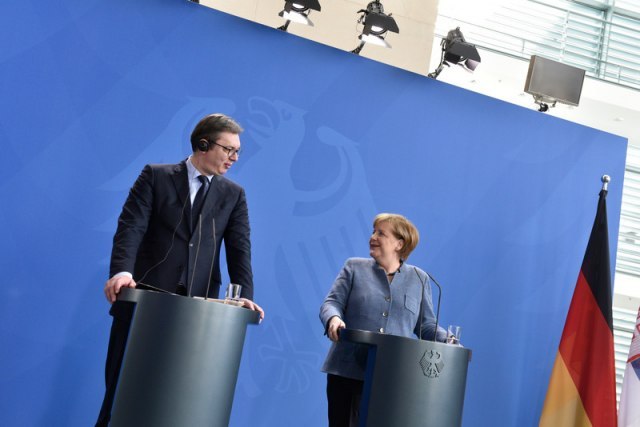 President Vučić thanked Chancellor Merkel for initiating the Berlin Process and thus contributing to creating a different atmosphere in the Western Balkans and opening new opportunities for cooperation, which makes the region more peaceful and stable.

He reiterated his strong support for the initiative, because, as he said, "the policy of cooperation in the region is at the top of Serbia's foreign policy priorities."

President Vučić pointed out that our country is a constructive partner of the Berlin Process and, as such, wants to contribute to the success of the upcoming Summit, as well as to improve the everyday life of everyone in the region.

In this regard, he expressed satisfaction with the abolition of roaming in the Western Balkans, which will take effect tomorrow, as an important relief for citizens and economies. He also expressed hope that the Nis-Pristina highway project would be realized, which would contribute to the creation of conditions for, above all, economic cooperation between Serbs and Albanians.

Vučić also talked with Chancellor Merkel about the dialogue between Belgrade and Priština. He emphasized that he is always ready to respond to the invitation to the meeting in Brussels, because he believes that only through dialogue can a compromise solution be found for open issues.

Aleksandar Vučić expressed hope that the situation will allow Chancellor Merkel to visit Serbia once again, before the end of her long and successful chancellor's mandate, which has very good relations with Germany, especially economic cooperation. In this regard, he informed the Chancellor about the economic results achieved by our country, as well as the fact that the number of our workers in German companies in Serbia exceeded 70.000.

The President of Serbia, Aleksandar Vučić, wrote on his Instagram profile that the meeting was very good.

"Very good conversation with the chancellor. Bilateral relations between Serbia and Germany are on the rise, and Serbia expresses gratitude to Angela Merkel for her contribution to peace and full stability in the Western Balkans region," the President concluded.