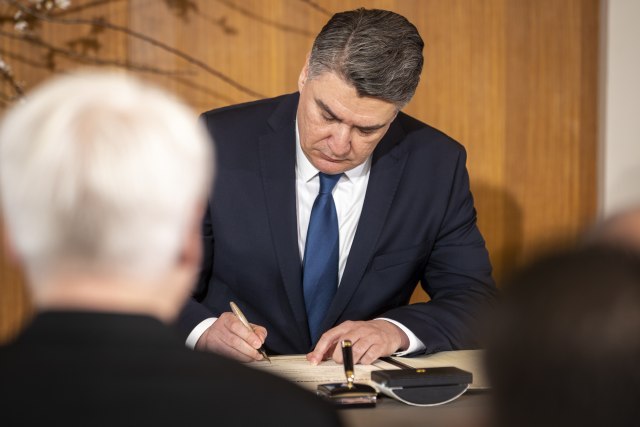 Constitutional Court President Miroslav Separovic said on that occasion that it was paramount for the court to stick to what he had sworn to do.

After announcing the solemn oath, Milanovic began to read the text immediately, and he had to wait for the oath to be repeated after it was first uttered by the President of the Constitutional Court.

Separovic explained that, according to the Protocol, he first had to say that the government called elections, when they were held, what the results of the elections were and then only to invite the president to sign the oath.

"However, he (Milanovic) read the text of the oath himself, which was agreed, and I do not see any particular problem. It is important that everything is in accordance with the Constitution and the law," Separovic said, adding that what was for the Constitutional Court most important, the new president adheres to what he has stated.

Milanovic became the fifth Croatian President, and during his inaugural speech he paraphrased the song of the famous band EKV entitled "Earth".

"This is a house for us. For all of us. For us who are here, for generations to come, for those who come, and for those who will return to their home," Milanovic said before thanking everyone and concluding with "Long live Croatia", the Croatian portal "Index" reports.

This is the first time that party leaders, diplomats, and church dignitaries did not attend a presidential inauguration, that was held in the President's Office in Zagreb's Pantovcak, disregarding the tradition of holding a public ceremony in the Saint Mark's Square.