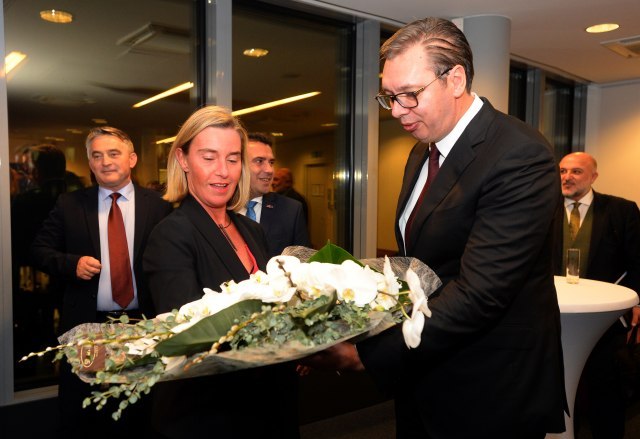 The outgoing EU High Representative for Foreign and Security Policy, Mogherini, invited Vucic and other Western Balkans leaders to a farewell working dinner at the EU headquarters in Brussels, and on that occasion, Serbia's President Aleksandar Vucic thanked Mogherini for her efforts and support of Belgrade's European integrations, presenting her with a bouquet of white orchids.

Besides Vucic, the guest at the woring dinner included Milo Djukanovic, President of Montenegro, Hashim Thaci, President of Kosovo, Zoran Zaev, Prime Minister of North Macedonia, and all three members of the Presidency of Bosnia and Herzegovina, Zeljko Komsic, Milorad Dodik and Sefik Dzaferovic.

Albania's Prime Minister Edi Rama is not in Brussels tonight because of a previously scheduled bilateral visit to Greece.

In addition to the topics announced, such as the assessment of the situation in the region, common challenges and results, it is expected that the Serbian President will insist that the resumption of the Belgrade-Pristina dialogue be discussed during the dinner.

The dinner hosted by Federica Mogherini is already a traditional format in which the EU foreign minister gathers leaders from the region since 2017.

This time it is also a farewell dinner, given the end of Federica Mogherini's term as EU High Representative, which expires on December 1st.

At the conclusion of the dinner, the president addressed the press.

At the beginning of the interview, Vucic said that "it is obvious that most people are disappointed with the decisions of the European Council", but that he "said earlier that this would be the result".

"Our strategic path is the path to the European Union and no one will question it", Vucic said.

Yet, the tactical route is to adapt.

"Tactically, we have to adjust, because the referee changes the rules during the game, but the weather changes also, so you take the kick when it's raining, you train in the rain."

Vucic added that "we must continue with economic reforms" and that he expects "the good news of quarterly growth tomorrow, to go beyond what the EB and the IMF have set".

"Our goal is to do everything we can and cooperate with everyone in the world. Today, I told Juncker that I am happy that we can sell our brandy both in Moscow and in Brussels. What is important to us is to realize their views and standpoints, but to push for our politics”, he said.

When it comes to regional cooperation, he said he was happy that people understood that we should turn to ourselves and solve our problems.

And when it comes to the relationship between Belgrade and Pristina, he announced a more frequent meetings "without European intermediaries".

Earlier during the day, Vucic had meetings with Jean – Claude Juncker, the Head of the European Commission, and Johannes Hahn, the EU Commissioner for European Neighborhood Policy and Enlargement Negotiations.