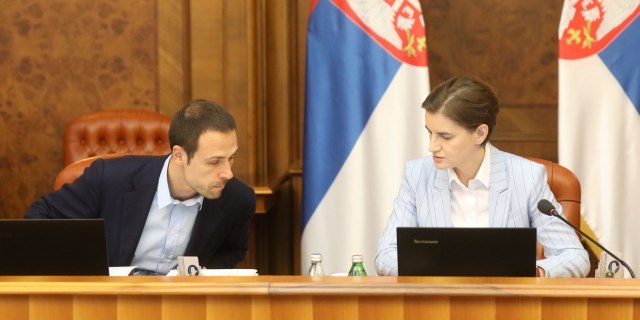 Prime Minister Ana Brnabic and Prime Minister of the Republic of Luxembourg Xavier Bettel assessed today that the two countries have very good relations and share the view that without a stable Balkans there is no peaceful Europe, noting that the future of Serbia in the European Union.

Brnabic told reporters after meeting with Bettel that Serbia is firm on the path to membership in the Union and that this is our strategic goal.

A European Serbia is the task of this government, the Prime Minister reiterated, adding that it depends on the Union when Serbia will become its member.

She expressed satisfaction with Bettel’s position, assessing that Europe will not be complete until the Western Balkans are part of the EU.

The Prime Minister said that at the meeting with Bettel, the Belgrade-Pristina relations and dialogue were also addressed, and asked Bettel to help Serbia overcome the stalemate in the negotiations.

According to Brnabic, the door for dialogue on the Pristina taxes is completely closed to the Serbian goods, which, despite the calls from the international community to withdraw, remain in force.

In addition, as she pointed out, the frequent incidents and provocations of Pristina are continuing, which Belgrade does not answer because otherwise peace and stability in the Balkans would be threatened in the worst way.

We will not respond to incidents and provocations, unless they escalate to a degree that seriously endangers the lives and safety of Serbs in Kosovo, she said, expressing hope that this would not happen.

Brnabic pointed out that the current situation is not good for anyone, primarily those who live in Kosovo, but neither the region nor the European Union, which is why we need to find a way out as soon as possible.

Pristina, as she said, should implement the Brussels agreement, because if this document is not implemented, it means that there is no first agreement on normalization.

According to Brnabic, the European Union, as a guarantor, needs to insist more on the implementation of the agreement and the establishment of the Community of Serb Municipalities in Kosovo, which Pristina refuses to do.

She expressed gratitude for Luxembourg's support to European integration of Serbia, stressing that the political cooperation between the two countries is at the highest level.

The Prime Minister of Luxembourg sent congratulations to Brnabic on everything she did to implement digitisation, pointing out that Serbia is leading in this race.

He said that he would be pleased to host her in Luxembourg because Serbia is a friend and partner, and mutual trust and cooperation capacities enable further improvement of these relations.

Bettel said that Serbia has a European future, stressing that only together we can find solutions to common problems.