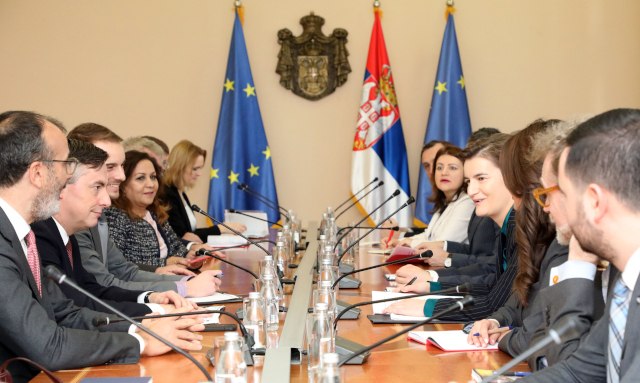 Prime Minister Ana Brnabic said on Thursday in a meeting with members of the delegation of the Foreign Affairs Committee of the European Parliament, led by Chairperson David McAllister, that the government will remain committed to further modernization of the country, noting that it will continue to implement the necessary reforms with this aim.

McAllister praised the progress made so far and wished Serbia to remain on its European road.

He assessed that the process of adopting a new media strategy was inclusive and transparent, and that this is an example that should be followed in the future.

She also reminded that public hearings in Novi Sad, Nis, Cacak and Belgrade were held during February.

Members of the delegation of the European Parliament's Foreign Affairs Committee were interested in the reforms made in the field of economy, public administration and the rule of law.

Brnabic presented the positive economic indicators registered in Serbia in the past period, the results achieved in the process of public administration reform and the progress Serbia has made in the negotiation process with the European Union.

Speaking on reforms in the field of public administration, the Prime Minister told McAllister that the National Academy of Public Administration started to work, and that good results were achieved on the improvement of the eGovernment system.

Brnabic expressed her gratitude to the delegation of the Foreign Affairs Committee and Chairperson McCalister for a constructive approach, recommendations and remarks that have helped Serbia in the past years to make the necessary efforts to achieve progress in the reform process.
Government remains committed to modernising country and its European path
Share: Twitter Facebook