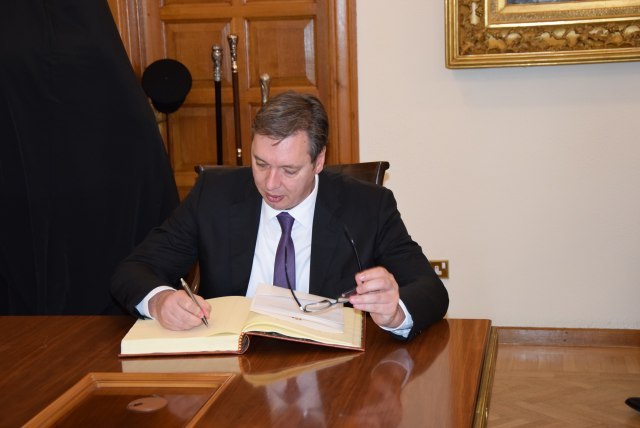 Vucic observed that it was obvious that for us, Serbs, "there will be no justice."

"Obviously our tears have no parents and even the murdered people, those with their throats slit, (Serb victim) Slobodan Ilic, will turn out to have been murdered by who knows who, or to have committed suicide," Vucic told reporters in Nicosia, Cyprus, on Friday.

Despite the living witnesses who confirm that Oric has committed crimes, some people pretend not to hear and not to see, Vucic recalled.

"We are against injustice, and against those who committed crimes being celebrated. Someone not found guilty for political reasons does not mean that they did not commit the crime. And I find it strange that someone has not been convicted - yet there are living people who can testify," said Vucic.

"That's why we need to fight even more for the people's progress, for better economic growth, and remembrance of our victims," he said.

"When others don't see them, we should, to make sure all those victims are not forgotten, including some who belong to a different kind, that our compatriots have executed," said Vucic.

He added that the outcome of the case had been "known in advance - because this is a political, not a legal decision."

"As for each verdict on the issue of each Serb officer that they commented on even before it happened, the first-instance, not to mention the final (verdict) ... we must overcome that, be strong, courageous," said Vucic.

He added he had "a clear message" for all those who wish to "humiliate and destroy Serbia":

"We threaten nobody, we don't want anything from anyone, we are in no need of anything that belongs to somebody else. We want to be at home in our own homes, to work, live, and with our work we will strive to be more successful. That right nobody can take away from us. But - seeing our worry and our concern - don't for a second think you saw our fear, or that you can run over and humiliate Serbia."

"We will never allow you that - Serbia and our people win in the end," Vucic concluded.