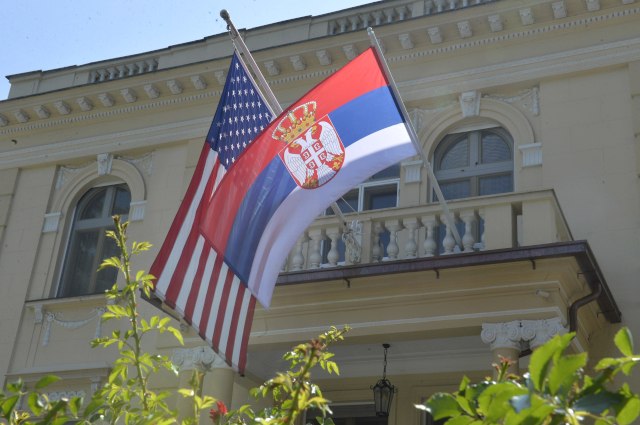 On the occasion of celebration of the 100th anniversary of the rasing of the Serbian flag over the White House - US President Woodrow Wilson's gesture meant to honor the sacrifice of Serbia in the First World War - Dacic said that he had just returned from Washington, where he attended the celebration of this anniversary at US Congress.

The United States and the Serbian capital together recalled our two peoples' historical alliances, but more importantly, together we paved the way for further development of our partner relations, Dacic said.

As he pointed out, Serbia is committed to achieving regional peace and stability by making efforts to become a part of a united, democratic Europe, and that is why the positive dynamics of bilateral relations with the United States is at the top of our foreign policy priorities.

"We especially appreciate the support America has so far given to our efforts in achieving all of these goals and I hope that it will continue to do so," Dacic said, according to the remarks published by the Serbian government.

"You have a reliable partner in our country, but it is our desire to be allies like one hundred years ago," Dacic said during a ceremony at the US ambassador's residence in Belgrade, where he and Ambassador Kyle Scott displayed the Serbian flag along the US one to mark the 100th anniversary of the White House event.

Dacic said the US policy toward Serbia and Kosovo had been on "autopilot," but that this had changed when Wess Mitchell took office as the assistant US secretary of state for Europe and Eurasia, Beta is reporting.

"They firmly support dialog and our efforts to reach a compromise. That is a big change. It means that the door has opened to seeking a new compromise solution for which the U.S. was not ready in previous years, believing the issue closed," Dacic said, adding that the support of the US, like several large EU countries, were giving impetus to a successful wrap-up of the dialog with Pristina.

Dacic said Pristina's policy as it had been conducted to date had failed and that Serbia had never had a better standing in relations with the great powers.

He also stressed that there was no chance for the negotiations to end with Kosovo getting a chair in the UN or with it being recognized as a state.

Scott said the solution for Kosovo needed to be reached through dialog and that Washington was ready to consider any deal between Belgrade and Pristina.