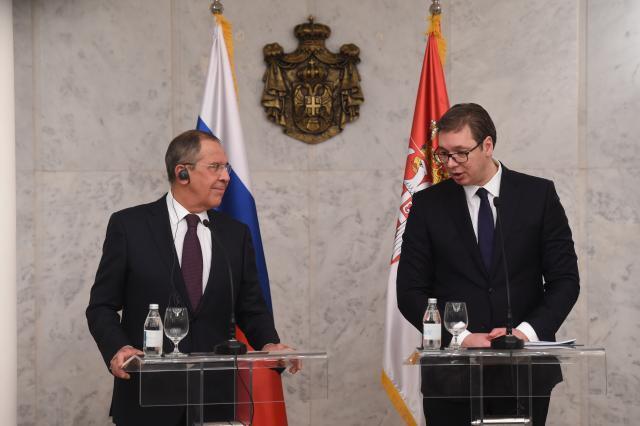 Sisoyev said that one of Lavrov's key messages was that Serbia is not threatened by "Ukrainization" - that is, destabilization and civil unrest as a result of being forced to choose between Russia and the EU - "as long as current political forces are in power."

The Russian foreign minister told a news conference with the Serbian president that Moscow was "not worried about Serbia as long as it has its elected leaders - Vucic and his team, the coalition voted for by the Serb people".

"That statement can be interpreted not only as support for Vucic, but also for the coalition of forces in power in Serbia. Judging by the statements made by Russian experts and politicians close to the Kremlin, Moscow does not fully trust the current president of Serbia, that is, he is not considered a pro-Russian statesman," said Sisoyev.

According to him, Moscow, however, proceeds from the fact that Vucic is the strongest political figure in Serbia. "Therefore, the formula that Russia obviously chose could be formulated as: Vucic, with a coalition of pro-Russian politicians at the top in Serbia," Sisoyev said.

He recalled that several years ago, before a parliamentary election in Serbia, senior officials of the ruling United Russia party openly wished success to then leader of the Democratic Party of Serbia (DSS) Sanda Raskovic-Ivic, who was in coalition with the Dveri Movement.

However, six days before the presidential elections in Serbia, President Vladimir Putin received Vucic in the Kremlin and openly made it clear who Russia prefers him as president. And prior to the formation of the Serbian government, Putin met with Vucic in the Kremlin and said in front of the cameras that Moscow expects ministers in the Serbian government to be oriented toward cooperation with Russia, said Sisoyev.

"That's why the current ruling political composition in Serbia suits Russia: Vucic is president, who prefers moving closer to the EU along with developed relations with Russia, while a whole range of politicians who can be considered pro-Russian are in 'the team' - such as Ivica Dacic, Nenad Popovic, Aleksandar Vulin," Sisoyev thinks.

He added that when Lavrov talks about "Vucic and his team, the coalition," he obviously thinks above all of Dacic, who was given a Russian decoration for fostering Serbian-Russian friendship during, and whose party colleague still controls Srbijagas (Serbian public gas enterprise).

"Support for Vucic will be stronger if there are more pro-Russian politicians in the government," Sisoyev said.

Sisoyev also assessed that Lavrov's brief Balkan tour last week - when he visited Slovenia and Serbia - "also had a dimension that is important for Russia, because in March the presidential elections will be held, where Putin is the unconditional favorite."

"In this context, the euphoric reception that Lavrov received in Belgrade, and to a great extent also in Ljubljana, was presented as evidence that Russia, at the height of the conflict with the West, has proven friends among current and future EU members, such as Slovenia and Serbia. For the sake of these goals the 180th anniversary of the establishment of diplomatic relations between Serbia and Russia was thought of - regardless of the fact that previous anniversaries were not marked by anyone," Sisoyev said.