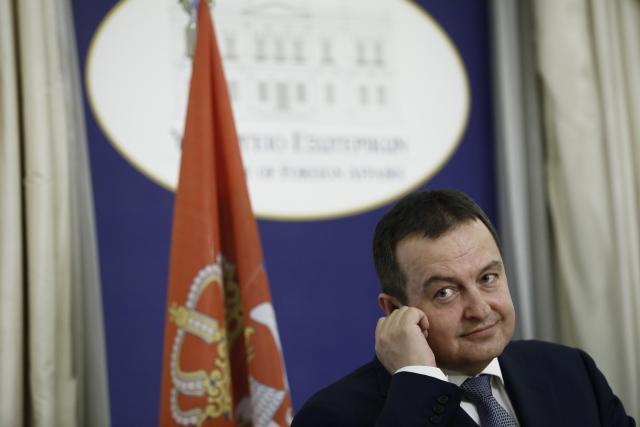 "If I caused damage to Serbia, let me be sacked, but I do think that, and I'm certain that 90 percent of our people think the same," said the minister, who earlier in the week named the United States, Britain, and France as "not Serbia's friends," at the same time describing the Russians as "friends and brothers."

Speaking for Blic, he said that "one needs to know the difference between friends and partners."

"We should cooperate with everyone, be partners, seek our common interests, but there's a big difference between your friends' relationship toward you, and those who always count themselves among the group of friends of Kosovo," said Dacic.

He assessed that great Western powers directly oppose Serbian interests by siding with one, mostly Kosovo side.

"You had a situation where Britain was asking and pleading with President Vucic that we vote for their judge in the International Court of Justice, and while pleading, at the same time their (UN) representative in New York was asking for Security Council sessions on Kosovo to be abolished," Dacic said.

He noticed that the US "had an interest in their resolution on Jerusalem passing at the UN, and informed other countries about it in a letter."

"While they're sending us that letter - at the same time their UN representative Nikki Haley goes to a reception at the Kosovo mission in New York, to a promotion of wines from Kosovo, which is 'a very important political event' - although she allegedly does not attend receptions. She said there directly that the US will do everything to help Kosovo become a UN member," Dacic said.

Asked "why this surprised him - considering that the US position on Kosovo is not unknown," Dacic replied with a question of his own: "Then how can I call them friends?"

"I didn't say they were enemies, but we need to work together on making them our friends. That's what I wished to say. We should not be talking to bureaucrats from foreign ministries, but with those countries' leaders, to see if there's a possibility of finding a common interest. I said this to Trump and Tillerson, Vucic said it to Pence, too, and I think to Trump as well. They said we both can, and should talk about it," Dacic said.

The minister added that it was "not his idea to lose friends, but for Serbia to gain new ones," but added that it would be a lie to say "we are strategic partners and friends with some of them."

Asked "whether it was appropriate for a diplomacy chief to speak this way" and "whether there are friendships in those relations at all," Dacic said that "only interests are constant."

"We don't share interests with them, because their stance is directly opposed to our interests. I wish to remind you that this is the first time in history of international relations that they don't have (common) interests with the Serb nation. I've said it in Washington, in Paris, and in London. They're not the only ones to blame, we are to blame too for failing to find a common ground," Dacic said.

He added that he "really wanted to apologize to Vucic because of a point of view that perhaps is not diplomatic" - but that he "said what he personally thinks."

"I told them, too, openly, to show that they are friends. Each time at the UN Security Council, America is calling on countries to recognize Kosovo. What would happen if I did the same against them. As far as they're concerned, establishing good relations with us means recognizing what they think about us," Dacic said.

He remarked that as he had "said this in the middle of the White House a month ago" - he "surely can dare say the same in Belgrade."

"I'm not saying it in the least with any desire to spoil relations, but to motivate changing them for the better. Even in a game show one has the right to 'phone a friend'," the minister concluded.