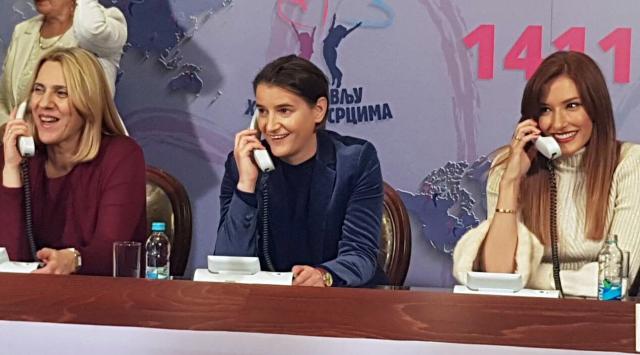 Brnabic stressed that Serbia does this primarily because people in Serbia and in the RS - the Serb entity in Bosnia-Herzegovina - are "bound by ties of great friendship and solidarity."

The prime minister was taking part in a donors' dinner when she mentioned as as good example Fund B92's humanitarian campaign "Battle for the Babies" that moved from Serbia to Bosnia-Herzegovina several years ago, when 33 incubators for prematurely born babies were donated to hospitals in Banja Luka, Sarajevo, Brcko, Trebinje, and Prijedor.

"Citizens of Serbia and the RS so far have shown humanity many times to understand the problems of others, and I believe that the Fund of Solidarity of the RS for the treatment of sick children abroad will be equally successful as the Budget Fund of the Republic of Serbia for the treatment of diseases that cannot be successfully treated in Serbia," Brnabic said, according to the Serbian government.

"I am sure that these two funds can successfully cooperate in the future. It remains upon us to point out the need for the restoration of charity, to give credit to those who are trying, in the best possible way, to help those in need. Every day, we have to do everything to save every life that is endangered by a disease," Brnabic said.

The RS will always have a friend, a partner and a family member in Serbia, the prime minister said in Banja Luka, Tanjug reported.

"We came here with two ministers of the Serbian government because it is important that we show this friendship, partnership, solidarity, and it is good to end in this way the year 2017, in which we had a joint session of the two governments," Brnabic said, adding that "joint projects were continuing."

Ahead of the charity event, she met with RS Prime Minister Zeljka Cvijanovic, when the two heads of government "concluded that political and economic relations between Belgrade and Banja Luka are good and will, in accordance with the Agreement on Special and Parallel Relations between the Republic of Serbia and the RS, continue to develop."

Brnabic "reiterated that Serbia respects the sovereignty and territorial integrity of Bosnia-Herzegovina - while taking into account the interests of the RS and clearly respecting the provisions of the Dayton Agreement."

This is a basic condition for the stability of Bosnia-Herzegovina, as well as the stability of the wider region, because without that stability, none of us will be able to advance to a modern and developed society, Brnabic pointed out, according to the Serbian government's website.

The prime minister "added that stability of the region is key to strengthening economic ties and improving the quality of life of all citizens."