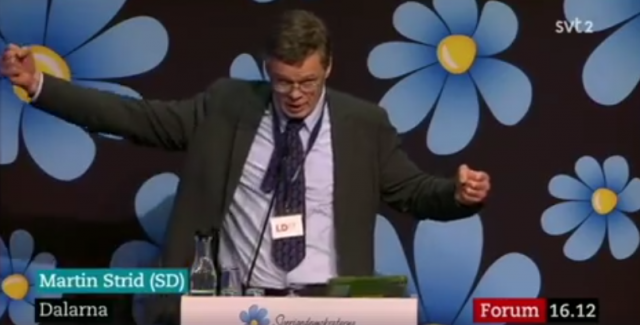 There is a scale of humanity from 1 to 100 that Muslims can be placed upon and not all are 100 percent human, Strid has been quoted as saying during his address to the party's national conference.

RT reported that other members of the party have distanced themselves from Strid who now faces expulsion.

The comments "may be the worst I have ever heard in such a context; it is “very close to racism," party leader Jimmie Akesson said.

Strid humself has since apologized for his remarks.

“It was very unfortunate and I expressed myself very clumsily. I have realized and it’s very unfortunate. I know a lot of Muslims and am good friends with a lot. People are people, of course,” he told the TT agency, adding that he was "aware his speech could be interpreted as saying Muslims are not 100 percent human," RT reported.

In its report, Beta remarked that the Democrats are a party of extreme right-wing that "media have described as populist and anti-immigrant."

It added that the party was founded in 1988 and has its roots in fascism, and was also a part of the movement for white supremacy in the late 1980s - while several of its founders are persons who have publicly expressed their support for Nazism.