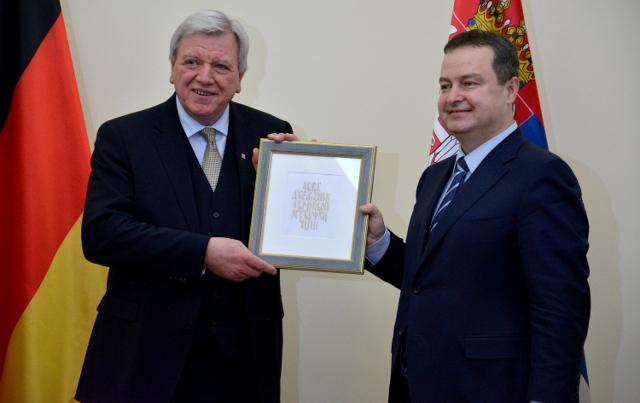 Bouffier, who is on a three day visit here, was received earlier in the day by Prime Minister Aleksandar Vucic.

According to Dacic, quoted by the Serbian government, relations between Serbia and Germany "have significantly improved in recent years, not only in the political but also the economic field."

He "noted that the volume of foreign trade last year reached almost EUR 4 billion and that Germany is one of the largest investors and that German companies in Serbia employ over 35 thousand employees."

Dacic "expressed his satisfaction with the visit of Bouffier, adding that Hessen is one of four German federal states with which Serbia achieves 70% of its exports to the Federal Republic of Germany," and "stressed that we want to improve cooperation with Hessen, which is the goal of this visit, in the political, economic and cultural terms, adding that an important role is played by our citizens who live in this province."

Bouffier said that he came to visit Serbia in order to strengthen relations with Serbia, but also in order to discuss increased investment activities of companies from Germany and Hessen.

He said he believed it would happen soon and stressed the importance of reforms in Serbia and contribution to the stability of the region for attracting investments.

Bouffier said he "believes that the opening of chapters 20 and 26 in the negotiating process on Serbia's membership in the EU is very good news, adding that the admission of the Western Balkans into the EU is of mutual interest."

The delegation of Hessen includes president and members of the Provincial Parliament of Hessen, as well as the former coach of FC Eintracht Frankfurt Dragoslav Stepanovic, according to a statement by the Ministry of Foreign Affairs.