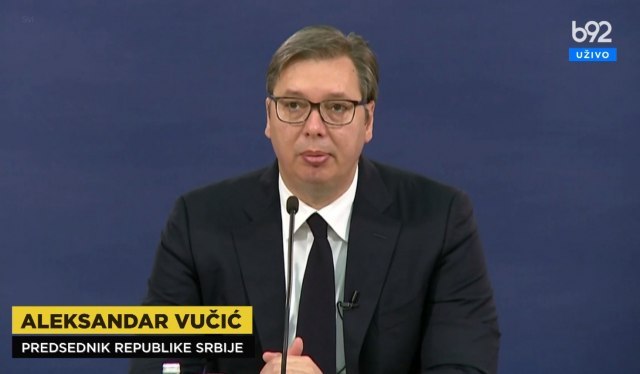 Serbia tests the most of all, only four countries test more than us. And we spend a lot of money on that, he said. We will bring this second phase under control, the numbers are better, the situation in the hospitals is better than it was, and today it seems to be better, the president said.

We expect huge problems in the world due to coronavirus. Accordingly, I want to tell you that it was very important that we defeated the virus in the first round, in order to save the economy.

Some said that we lifted restrictions too soon, and if we had not, they would say that we are introducing a dictatorship.

He also said that the Government of Serbia is adopting new measures today - a moratorium on loan repayment, deferral of tax payments and payment of part of the minimum wage.

There has always been and will always be pressure on our country, not because it should be like that, but because that is the policy. But, it is important to me that the citizens know that Serbia has done everything and is working to strengthen, and when it strengthens, those who would like to attack Serbia will have to think carefully, the president said.

Speaking about the numbers of people suffering from coronavirus, Vučić said that they are better, both those that are communicated to the public and those that he received from doctors.

He added that he is satisfied with the measures taken, economic progress, growth of industrial production, although, he says, he can never be happy since we are facing a severe crisis caused by a contagious infection.

"But we are fighting, surrender is not an option. We will win and I am convinced that all numbers will be better from Monday, not only those visible at first glance, but also those we receive from doctors, the number of patients discharged and admitted to hospitals... It is not time to relax, we must respect the measures and, if that happens, we will know that the wave has passed", Vučić said.

Then, answering the question of the journalists, he said that Serbia will look to procure as many vaccines against coronavirus as possible and that it'll make efforts to give them to people for free.