"In Italy it is now called the 'Serbian virus'" VIDEO

Epidemiologist Predrag Kon told Prva TV we already have positive effects of responsible behavior, otherwise we would face sudden leap in the number of infected. 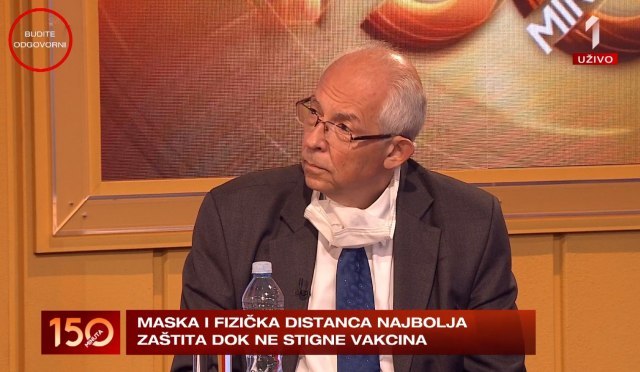 Kon points out that at the beginning of the pandemic, there was no speculation that the virus had a weaker effect on pregnant women, regarding the information that another pregnant woman and her baby had died.

"We did not speculate, but used experiences and data from China. These data remain to this day, it is still a rarity... But this tragedy that causes regret is something that warns. Pregnant women are not spared either. No age-grouped population is spared The only question is how common such severe forms are. With this fatal outcome in both the child and the mother, we have one serious warning to think further. In total, there have not been so many serious situations during all this time, now we suddenly see three tragic endings for pregnant women”, Kon said.

"You have difficult cases in younger people as well. In the total number of cases, you can see that the infection has moved towards a larger number of younger people," Kon said being hosted in the show 150 Minutes on Prva TV.

"In Italy, they now call it the 'Serbian virus', as we initially called it from Milan or Swiss. All these are ideas and beliefs that they have mutations or transmitting abilities. It has not been proven. There is an established ability and high potential for transmission during in the summer”, he said.

Neither ultraviolet radiation nor elevated temperature helped where there are celebrations, super-transmissions, where there is stronger mobility, and there is more transmission than usual.

"Supercarriers are also those who communicate with a lot of people and have the opportunity by profession to, if they do not recognize that they are infected, transmit the virus to a very large number of people," Kon pointed out.

When asked if the virus is stronger and whether it mutated, he says that there are so-called systemic manifestations of the disease, that were discussed earlier. Virologists should talk more about that, but that is also the pathogenesis of the disease, whether the virus is transmitted through the blood to the organs. It has its place where replication begins. The main place, normally, is the lungs. However, the penetration of the virus further and its spread and impact on blood coagulation is something attributed to the virus, Kon explained, adding: "It is still not entirely clear why this happens to some people, but it is also related to the presence of the virus receptors. Of course, we will learn more about this disease on a daily basis".

"A small number of those who experienced reinfection have been proven. Again, after they had a positive result, they were cured, they suddenly become positive with a new clinical picture... They should be followed. It is important for the future, vaccination. Our present knowledge is insufficient".

He reiterates that it is important that we all wear masks because that is how we are all the most protected and "everyone who does not know that they are contagious or have a mild infection unrelated to the coronavirus with a mask protects a lot of people."

Measures and changed consciousness of people are already yielding results.

"We are already feeling the effects of responsible behavior, otherwise we would have a sharp increase in the number of infected, especially in Belgrade. We see flattening of the curve, no explosive leap in the number of patients in the hospitals, we have discharges in parallel with admissions or transport to other hospitals where the situation is easier. The elasticity of the system in Belgrade is really fascinating. It is necessary to continue to adhere to these measures. We also monitor how many people appear in the COVID clinics and how many suspects are found in COVID health centers. I am talking about Belgrade because Belgrade is the biggest risk. We have to learn that we must never relax in a pandemic again", Kon said, adding that the pandemic is an extraordinary natural disaster. It destroys the economy, kills people and causes depressive reactions of people..." Dr Kon explained that if everyone wears masks, the protection is 99 percent.